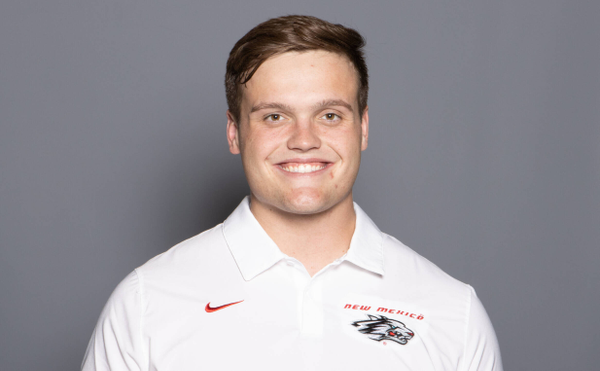 2021 (Junior Season): Played and started in all 12 games … recorded 36 tackles, tying for ninth on the team … had 2.5 sacks for 19 yards and 4.5 TFLs for 21 yards … also had two QB hurries … had a career-best six tackles against Air Force, including a half-tackle for a loss … had five tackles against both Colorado State and UNLV … added a TFL against UNLV as well … had 1.5 sacks and TFLs against Boise State for 12 yards … had a sack for seven yards against Houston Baptist in the opener … had QB hurries against New Mexico State and UTEP.

2020 (Sophomore Season): Saw action in all seven games, all starts at defensive end … recorded 12 tackles and a team-leading two fumble recoveries … recorded a career-best five tackles in UNM’s 17-16 win over Wyoming … helped keep Wyoming off the scoreboard by recovering a fumble in the final three minutes at the Lobo 5-yard line with UNM up just one point … also had a fumble recovery against Utah State … recorded his first sack against Hawai’i, a nine-yarder … also had a 12-yard sack against Fresno State.

Junior College:  Played one year at Foothills Junior College where he recorded 52 tackles, with 18.0 tackles for loss totaling 85 yards … also had 9.5 sacks on the season for 67 yards …  blocked two kicks, forced a fumble, recovered a fumble and had one pass breakup … named a JUCO All-America and he was also First Team All-Conference …  had 10 tackles in the season opener for Foothills, a 27-6 win over Merced in which he had 3.5 sacks and 5.5 tackles for loss … Foothills went 10-1 and allowed just 10.6 points per game.