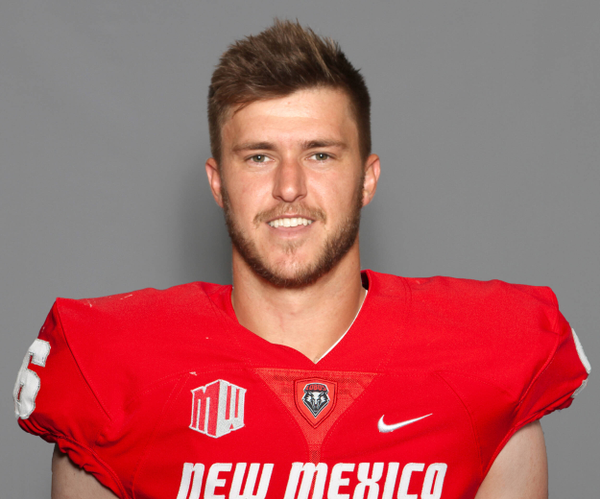 Is the first Australian punter in program history.

2019 (Junior Season):  Named Second Team All-Mountain West … was a Ray Guy Award semifinalist after averaging 46.1 yards per punt with a long of 63 yards and 35 punts inside the 20 … the 46.1 average was the second-highest in New Mexico history … the website GPRPunting.com named Dyer an honorable mentioon All-America, and it also named Dyer as the Mountain West’s top punter … finished second nationally in punts inside the 20 and he led the nation in percentage of punts inside the 20, with a 59.3% mark … twice was named to the Ray Guy “Great 8” weekly award … averaged at least 46.0 yards per punt in nine of 12 games … punted twice against New Mexico State, averaging 59.5 yards per punt … against Colorado State he punted seven times for a 43.3 yard average with all seven punts inside the 20-yard line … against Liberty, he averaged 47.8 yards per kick on five punts, with all five inside the 20-yard line … had multiple punts inside the 20 in 11 of 12 games and multiple 60-yard punts in nine of 12, including two in each of the final five games … served as a holder for all PATs and field goals … rushed for two yards and a first down at Notre Dame.

2018 (Sophomore Season): Named honorable mention All-Mountain West … averaged 44.3 yards per punt on 74 punts with just six touchbacks … had 19 punts pinned inside the 20, and 19 punts of 50 yards or more, including a school record 84-yard punt … averaged at least 43.5 yards per punt in nine of his 12 games … finished 17th nationally in gross average … average was the fifth-best in UNM history for a single season … set a Lobo record, and Mountain West sophomore record with an 84-yard punt at Air Force that was downed at the 1-yard line, leading to a Lobo touchdown on the next play … averaged a season-best 50.1 yards per punt on seven punts in that game … tied his season-high with three 50-yarders in that game, and had a season-best three pins inside the 20 … averaged 49.8 yards on four punts against Liberty … unloaded a 69-yard punt against Utah State, one of three 50-yarders in that game … also had three 50-yard punts against Fresno State … also served as the holder for all 39 extra points and eight field goal attempts by UNM.

Junior College:  Played one season at Palomar College for coach Joe Early … punted 65 times for a 39.9 yard average with 23 of his 65 punts pinned inside the 20 with just one touchback … averaged 41.4 over last eight games and 42.5 over last four … had at least one 50-yarder in six of last seven games, and at least one 60-yarder in each of his last two, including a career-long 70 yard punt … was named First Team All-Southern California Football Association.