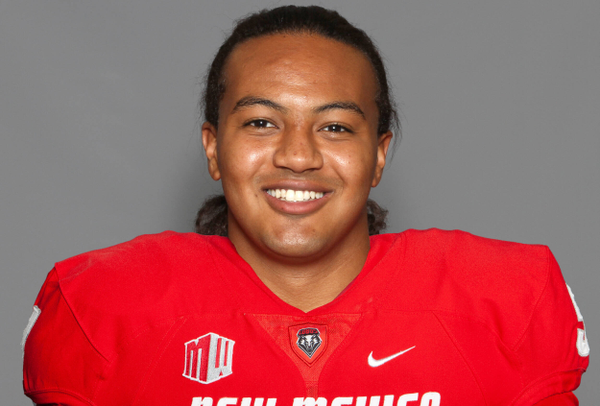 Academics/Non-Football: A 2016-17, 2017-18 and 2018-19 Lobo Scholar-Athlete … a 2018 and 2019 Mountain West All-Academic selection … an extremely well-rounded individual who is self-taught in several musical instruments (guitar, piano and saxophone) … spends each summer traveling to the Pine Ridge Indian Reservation in South Dakota to take part in the Ogala Lakota ceremony … spent part of the spring of 2019 in Washington D.C. with the Save the Children Advocacy Network, speaking on behalf of children and indigenous people to members of congress … in spring of 2020 he spoke with members of the New Mexico Legislature regarding mental health initiatives for student-athletes in the state of New Mexico.

Watch Lists/Honors:  Named to the preseason watch list for the Wuerffel Trophy and the Outland Trophy … was the only Group of 5 player named to the 22-man Allstate AFCA Good Works Team.

2019 (Redshirt Junior Season): Named honorable mention All-Mountain West … started all 12 games at right tackle … played 819 snaps, the second-most of any Lobo on the offensive side of the ball … allowed just three sacks and only one hit on UNM quarterbacks in 390 pass blocking attempts … recorded a 97.7% pass blocking efficiency rating.

2018 (Redshirt Sophomore Season): Saw action and started in all 12 games at right tackle … tied for the team lead in snaps among offensive linemen with 806 … recorded a 96.7% pass blocking efficiency rating … according to Pro Football Focus, Saltes was one of UNM’s top blockers with high grades both in pass blocking and run blocking.

2017 (Redshirt Freshman Season): Saw action in four games before an injury ended his season … switched from defensive line to offensive line a week before the season opener and was one of UNM’s top lineman when he was lost for the year … started at right tackle against Air Force and Fresno State, and played the majority of the game at tackle against Tulsa.

Personal: His parents are Fontaine Saltes and Laticia DeCory, and his stepdad is Eric Sampson … his great uncle is former NBA star World B. Free … has two brothers Eric and Adonis, and he has a sister, Felicia … born on May 4, 1998 … father played basketball at Weber State and mother played basketball at BYU and ran track at Utah State … graduated with a degree in political science and is currently attending UNM Law School.