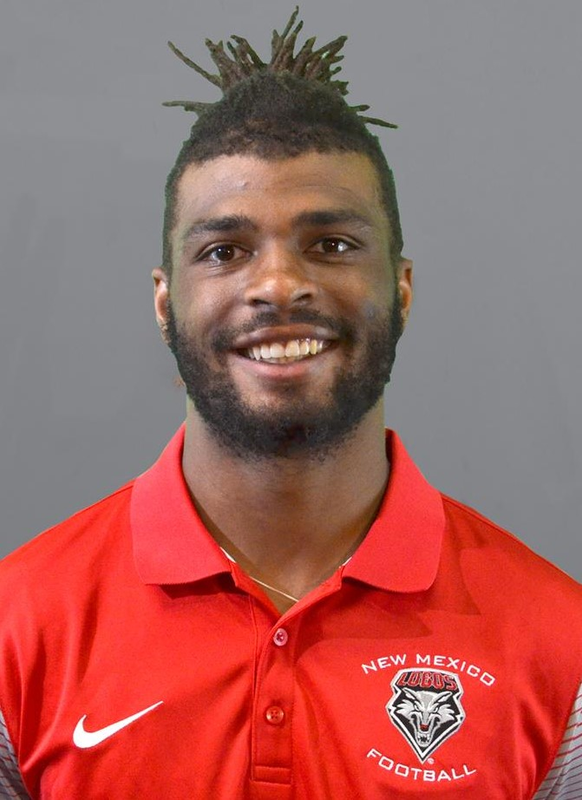 New Mexico: Versatile running back who excelled in high school locally … can do everything from rushing, receiving to returning kicks.

2016 (Redshirt Junior Season):  Missed the season due to an ACL injury.

2015 (Redshirt Sophomore Season):  Played in eight games, missing four after getting injured in the opener … rushed 15 times for 61 yards and had four receptions for 33 yards … recorded two tackles as well … rushed six times for 33 yards in the opener against Mississippi Valley State … turned in his biggest two plays of the season in the Homecoming win over Hawai’i, twice converting fourth downs on the winning drive with receptions … also rushed for 21 yards on five carries in that game … caught a 15-yard pass against Air Force.

2014 (Redshirt Freshman Season):  Played in nine games at running back, starting one (Colorado State) … saw his first action with the Lobos on special teams, not getting his first carry until his fourth game, against Air Force … ended the season sixth on the team with 223 rushing yards on 34 attempts with three touchdowns … had one reception for 22 yards … also recorded a tackle … in his debut as a rusher, had 45 yards on six carries, including a 29-yarder … had his best game against Utah State, rushing nine times for 96 yards, including a 72-yard touchdown … also added a 22-yard reception in that game … scored a touchdown in each of UNM’s final three games, against Utah State, Colorado State, and Wyoming.

High School: A 2012 first-team All-State selection and District 1-5A Player of the year for the Storm and coach Heath Ridenour … rushed for 1,649 yards and 25 touchdowns in 2012 and caught passes for 291 yards and four TDs to also earn first-team all-district and all-metro honors … averaged 203.7 all-purpose yards … a finalist for New Mexico Gatorade Player of the Year and a North-South All-Star … Cleveland finished 6-5 and advanced to the Class 5A playoffs … rushed for 1,131 yards and recorded 649 receiving yards as a junior, scoring a total of 23 TDs … first-team All-State and all-district RB in 2011 … Cleveland went 13-0 and won the 5A state championships.