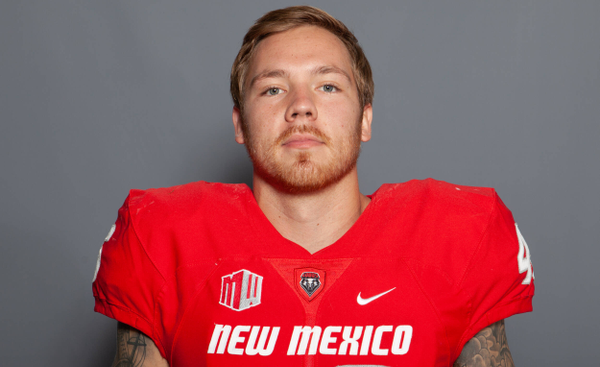 College of the Canyons/Westlake HS

2018 (Redshirt Sophomore Season): Played in all 12 games, recording 40 tackles, 3.5 tackles for loss for 26 yards, 2.0 sacks for 17 yards, and two forced fumbles … recorded a career-high 14 tackles, the most by a Lobo in 2018, against Boise State, adding a sack for eight yards in that game … recorded three tackles, a tackle for loss and a forced fumble in his first Lobo game, against Incarnate Word … had two tackles, a sack and a forced fumble in  50-14 win over UNLV … had seven tackles including a half-tackle for loss against Air Force … finished the year off with a five-tackle game against Wyoming.

Junior College: Lettered for one season at College of the Canyons for coach Ted Iacenda … played linebacker, seeing action in all 11 games for the 5-6 Cougars … recorded 32 tackles, good for a tie for eighth on the team … had 8.5 tackles for losses totaling 31 yards, 5.0 sacks for 23 yards, two passes broken up, a fumble recovery and a blocked kick … recovered a blocked punt for a 16-yard touchdown.

Personal: His full name Brandon Alan Shook … his parents are Alan and Christa Shook … has two brothers, Tyler and Trevor … born on December 14, 1997 … graduated with a degree in criminology and is working on a master’s.