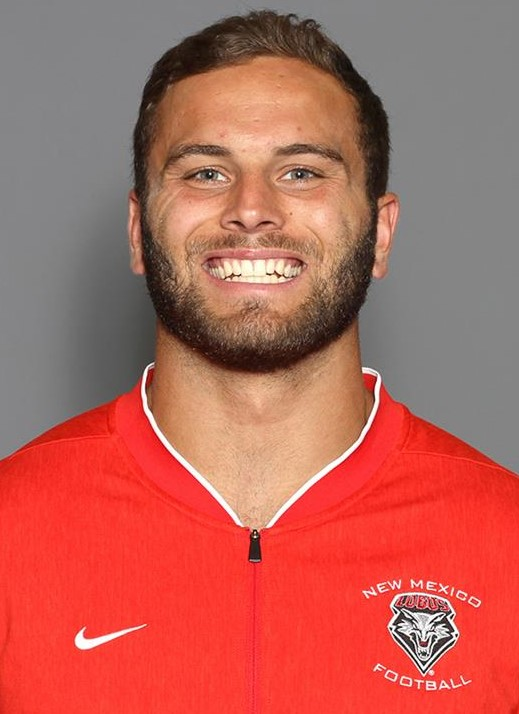 2018 (Senior Season): Played and started the first three games before having his season end on a torn ACL … was leading UNM with 19 tackles when he was injured … was injured in the first half against New Mexico State after recording two tackles … had a career-high 13 tackles against Wisconsin … opened the season with four tackles against Incarnate Word.

2017 (Junior Season): Played and started in all 12 games at middle linebacker … was third on the team with 58 tackles and he led the team in hurries with five … also had 5.5 TFLs for 19 yards, had one sack for eight yards, three pass breakups, one forced fumble and one fumble recovery … recorded a career-high in tackles twice, against Air Force and against UNLV … added 1.5 TFLs, including a sack, against Air Force along with a hurry and a forced fumble … recovered a fumble against Abilene Christian … had six tackles against New Mexico State with a tackle for loss, a hurry and a career-high two breakups … had five tackles against Colorado State.

2016 (Sophomore Season): Saw action in all 12 games, starting one at middle linebacker … recorded 26 tackles, 4.0 for loss, with a sack, a forced fumble and a fumble recovery … had a career-best four tackles in back-to-back games, against New Mexico State and Rutgers … the Rutgers game was his one start at middle linebacker … also had three tackles against ULM and Nevada … forced a fumble against Colorado State … recovered a fumbled punt against Wyoming that led to a short touchdown drive.

2015 (Freshman Season): Saw action in the final nine games, mostly on special teams … recorded two tackles on the season, but was a key blocker on UNM’s kickoff return unit … had special teams tackles against Hawai’i and at Boise State.

High School: Lettered in football for three seasons at Prior Lake, Minnesota under head coach Matt Gegenheiner … helped Prior Lake to the 2012 and 2014 section title and the 2012 and 2013 state playoffs … served as a team captain and was named Associated Press First Team All-State as senior … also earned Minnesota Vikings First Team All-State, Kare 11 All-Metro and Star/Tribune All-Metro … was named all-conference all three seasons (2012, 2013 and 2014) … was named Offensive Team MVP as a senior after being named the Defensive Team MVP in 2013 … in wrestling he was the Minnesota state champion at the 220-pound class in 2014 … he finished third in 2013 at the 195-pound class … team captain as a junior and a senior and was team MVP as a junior … a member of the Prior Lake Honor Roll with a 3.7 GPA.

Personal: Full name is Alexander William Hart … his parents are Pat and Nancy Hart … has two brothers, Nick and Sam … birthday is May 23, 1997 … graduated with a degree in liberal arts and is working on his master’s.