Overall, the three honorees on the Second Team are the most for UNM since 2016 when UNM had no First Team picks but four Second Team picks.  That year UNM also had eight total honorees.  Of the eight honorees this season, six are slated to return in 2023. 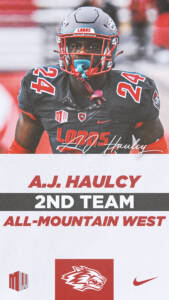 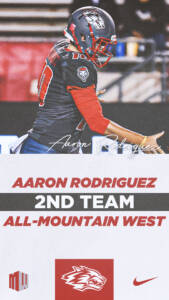 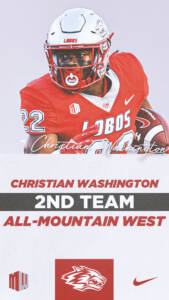 Haulcy, who led all true freshmen nationally in tackles (he finished the regular season second among all freshmen) was the lone position player to earn Second Team All-Conference.  Haulcy, who recorded 24 tackles against Fresno State, the most by a player in an FBS game in four seasons, finished the year with 87 total tackles, 3.0 TFLs for 10 yards, two interceptions, three breakups, a hurry, two forced fumbles and a fumble recovery.

His 24 tackles were the most by a Lobo since 2016, and the last time a player in the FBS recorded more than 24 tackles against a non-option team was in 2007.  Haulcy, who only played eight plays on defense over the first two games of the season, was pressed into action in game three when Tavian Combs went down for the season.  He intercepted a pass in that game and then on the third play of the second half, with UNM ahead 20-3, UTEP connected on what looked to be a 77-yard touchdown pass, but Haulcy sprinted downfield, and forced a fumble at the 1-yard line that hit the pylon for a touchback.  He twice earned Mountain West Freshman of the Week honors.

UNM’s other freshman to earn a spot on the second team was kick returned Christian Washington.  The speedy running back from San Diego, Washington averaged a league-leading 26.7 yards per return on 16 returns.  He was named the Mountain West Freshman of the Week after setting up two scores against Boise State, one on a 31-yard return and then the other with a 100-yard kickoff return.  His long 63-yard return against Wyoming set up an early first quarter touchdown, and he added 326 yards on the ground in 2022.  He led UNM with 813 all-purpose yards.

Aaron Rodriguez was UNM’s third Second Team selection.  He finished the year with the exact same amount of punts, 81, as a year ago, and he raised his average this year to 44.2, good for third in the league.  A three-time Ray’s 8 honoree, Rodriguez netted 40.5 yards per punt, second in the league, and his 23 punts inside the 20 were also tied for second in the league. For the second straight year, Rodriguez’ punted more times than any other punter in the FBS. 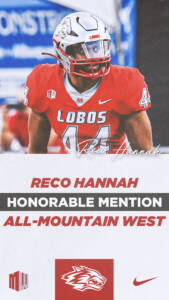 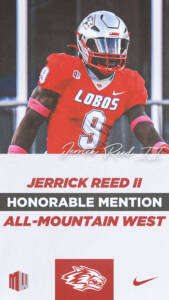 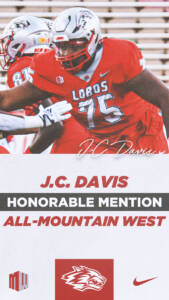 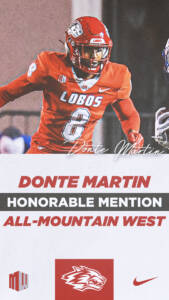 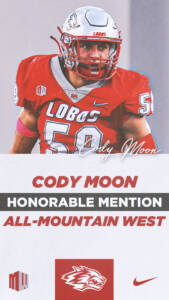 For UNM’s five players that earned honorable mention, four play on defense.  Cody Moon became the first Lobo in eighth years to record over 100 tackles.  The two-time Burlsworth Trophy nominee finished with 105 tackles on the year, bcoming a starter partway through the season.  Jerrick Reed II finished the year with a team-best 11 pass breakups, and he finished his career in the Lobo top 10 with 22, good for ninth overall.  Donte Martin had six PBUs and can return for a COVID super senior season, which could mean that he breaks the career PBU record at UNM, as he has 25 in his career.  He is six away from tying Glover Quin, who had 31 in his career.

Reco Hannah was a Mountain West Defensive Player of the Week after his pick-six opened the scoring against UTEP as he was one of two Lobos to start all 12 games on defense (Reed was the other).  J.C. Davis was UNM’s top offensive lineman, anchoring the blind side for UNM’s quarterbacks.