ALBUQUERQUE, N.M.– The Lobo women’s basketball team begins their first of four games in eight days on Saturday when UNM hosts Fresno State at 2 p.m. in The Pit.

Paula Reus had her best game of the season with 17 points and nine rebounds against CSU with a season-high four, three-pointers, and finished with 14.5 points per game and 7.0 rebounds per game on the week.

In Saturday’s game, UNM made 19 three-pointers against the Rams, which would have broken the program record if not for the 21 made against Utah State back on Jan. 6.

Over the last four games, the Lobos have made 62 three-pointers, an average of 15.5 per game, and have made a total of 76 in conference play (six games). The closest MW team has 53 made threes, also in six games.

Through the first six MW games, five Lobos are averaging double figures in conference play, with Jaedyn De La Cerda at 16.8 ppg, McGruder at 16.5 ppg, LaTascya Duff at 13.7 ppg, Anderson at 13.2 and LaTora Duff at 10.3. Reus has 8.5 ppg and is averaging 5.5 rebounds per game. On the season, the same five are averaging double figures, but McGruder leads, followed by De La Cerda, LaTora, LaTascya and Anderson.

Further, McGruder is still the only MW player who is in the top-10 in scoring, rebounding, steals and blocks on the season.

Of note, when Anderson takes the court on Saturday against the Bulldogs, she will set the program record for most games played by a Lobo with 135 career games and will break the record set by Angela Hartill (2005-09).

In comparison, Fresno State has played five conference games and two players in double figures in Haley (19.1 ppg) and Hanna (14.3 ppg) Cavinder. Haley leads in assists and rebounds as well, while Hanna leads in steals for the Bulldogs.

Fresno State enters the game 7-9 on the season and 3-2 in the MW after a 66-57 loss at Air Force on Wednesday night. Haley Cavinder was the leading scorer with 24 points, with Wytalla Motta the only other double-digit scorer with 10 points. Cavinder also led with 13 rebounds with Motta finishing with 10 for double-doubles. Fresno State is 3-5 on the road this season, 1-1 on the road in MW games.

Cavinder leads the MW in scoring and rebounding on the season and in just conference games. The Bulldogs have two players in double figures in Haley (18.7 ppg) and Hanna (14.7 ppg) Cavinder. Haley leads in assists (84) and rebounds (144, 9.6 per game) as well, while Hanna leads in steals (26) for the Bulldogs.

As a team, Fresno State is second in three-point percentage in conference games with .388 and third in field-goal percentage (.436). The Bulldogs are fourth in scoring offense at 71.6 ppg in MW games.

At 3-2 in the conference, the Bulldogs have wins over San José State (twice) and San Diego State, with a loss to UNLV and Air Force.

PROMOTIONS
There will be a diaper drive at Saturday’s game with diapers going to the UNM Children’s Hospital. Those who donate diapers will receive a free water bottle.

In addition, Saturday will have a $5 draft beer promotion. The promotion applies to Bud Light and Michelob purchased at Stand J while supplies last.

PIT POLICY
As a reminder, there will be a change in the entry requirements for all events in The Pit. Lobo fans will have three ways to come and enjoy Lobo Basketball in The Pit.  The simplest will be for patrons to provide proof of vaccination status. Proof of vaccination status means having two shots of Pfizer or Moderna, or one shot of the Johnson & Johnson vaccine (or AstraZeneca for international fans), with the last shot received two weeks prior to the date of event entry. The second way to enjoy Lobo basketball at The Pit would be to provide proof of a negative COVID test. A PCR test must be within 72 hours and an antigen test must be within 24 hours of the event. Home COVID tests are not valid for this type of entry.  The third way to enjoy Lobo Basketball at The Pit is to be under 12 years old, as fans up through age 11 will be admitted without proof of vaccination.

Patrons to all events at The Pit must additionally adhere to all other state health regulations, which currently include wearing a mask in any indoor venue or setting. 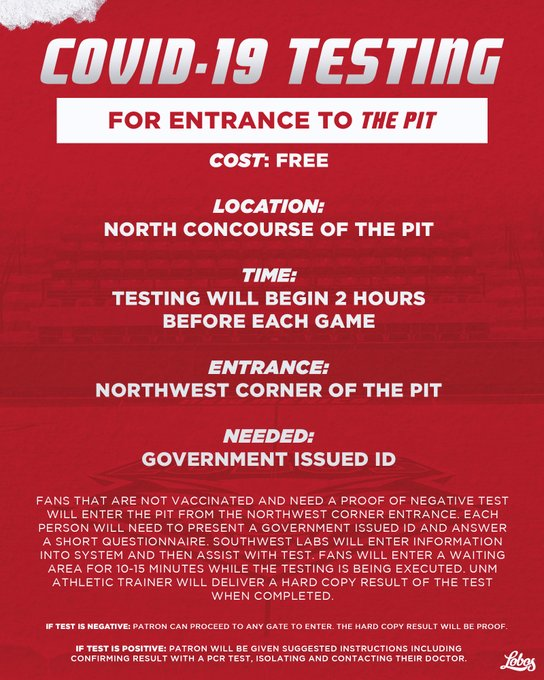