ALBUQUERQUE, N.M. — Heath Ridenour, who has presided as the head coach of the Cleveland Storm, winning three state titles including the last two, has been tabbed by head coach Danny Gonzales as the new quarterbacks coach at UNM.  Ridenour takes over for Drew Mehringer, who left the position recently to join the staff at Oregon.

In a corresponding move, Jamie Christian has added the duties of running backs coach to his previous duties of Special Teams Coordinator, taking over for Jordan Somerville, who left for an analyst position at Oregon.

“Bring in a coach with the background in success that Heath Ridenour has will be tremendous for our program,” said Gonzales.  “Heath was a tremendous student-athlete, and his success as a coach is without question.  He is a terrific teacher and motivator, and as a native of New Mexico, he has a passion for Lobo Football.  He is a perfect fit for our program.”

“Jamie has also worked with our receivers and running backs in the past, so he is familiar with our players.  He has done a great job with our special teams and he will bring that same attention to detail and passion to our running backs room.”

The hiring of Ridenour brings a second highly successful New Mexico high school coach into the fold as Ridenour joins his David Howes on staff.  Howes was the head coach of the rival Rio Rancho Rams.  Between the two, they won five of the last seven Class 6A titles, including a head-to-head matchup in the 2019 title game, won by Cleveland.

A former collegiate quarterback in-state at Eastern New Mexico, Ridenour’s Storm squads were well known for their offensive propensity.  In his 10 seasons at the head coach of Cleveland, Ridenour’s teams went 96-18 (an .842 clip), including an eye-popping 73-7 over the last seven years.  Six times his teams have averaged over 40 points per game, and four times the Storm led the state in scoring offense, including the past three years.

"I am fired up to be part of the Lobo Football program! I am very grateful to Coach Gonzales for the opportunity and cannot wait to work with this outstanding staff and hard working group of student-athletes! Let’s get it! Go Lobos!

Before moving into the head coaching slot, Ridenour was Cleveland’s offensive coordinator in 2010 and 2011, going 22-2, winning two district titles and winning the 2011 state title with a 13-0 season.  He also has served as an assistant at Clovis (2005-09), winning five district titles and finishing as the state runner-up twice.  He also spent one year (2004) at Portales High School.

He played collegiately at Eastern New Mexico where he was a three-year starter at quarterback.  Along with earning ENMU MVP honors in 2002, he was the Lone Star Conference and Division II National Player of the Week in 2002.  A three-time All-Conference pick and a two-time team captain, Ridenour holds the Greyhounds’ single-game rushing record with 294 yards.  He also played basketball there from 1999-00.

A native of Lovington, New Mexico, he and his wife Erica have three children, Brooklynn 11, Kinley 9 and Cooper 6. 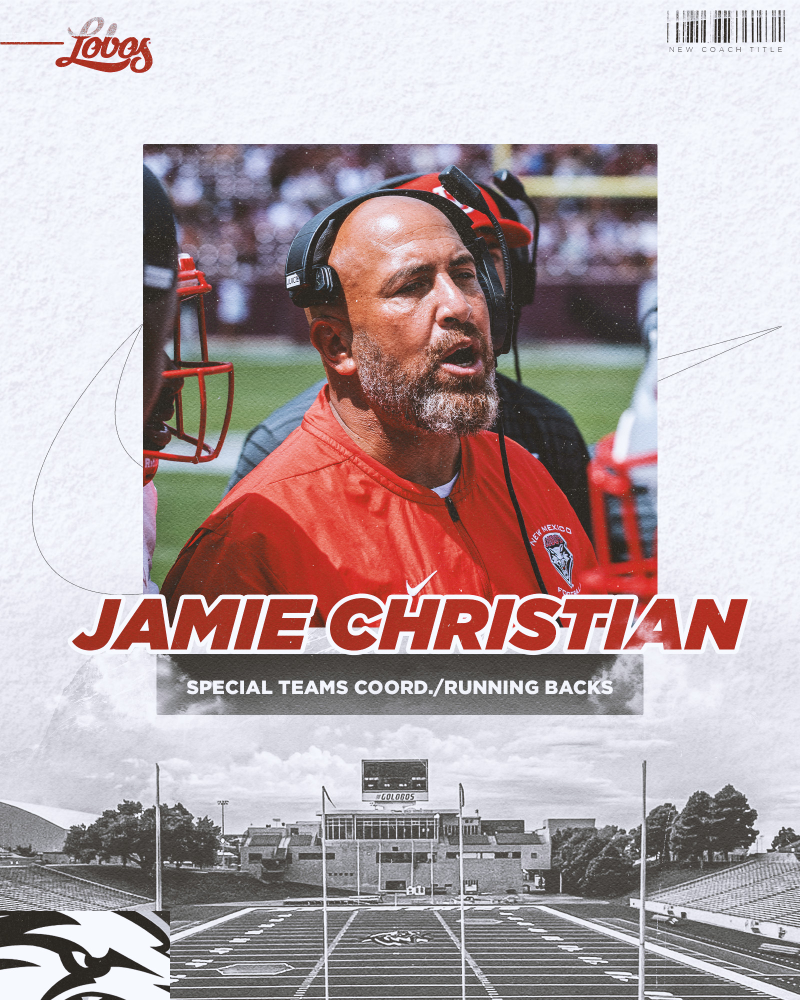