ALBUQUERQUE, N.M. – The 1990s saw a lot of great baseball at UNM, and the closing of a major chapter in the school’s history as the team would leave the Western Athletic Conference after the 1999 season and head to the newly formed Mountain West in 2000.  Lobo baseball fell just short of 300 wins for the decade and had three straight 30+ win seasons (1992-94).

It also saw an unprecedented 20 Lobos drafted into Major League Baseball, three players earn WAC Player of the Year and the earn WAC Freshman of the Year.

“Every All-Decade team is very difficult to select because New Mexico baseball is so rich in its history,” said current head coach Ray Birmingham. “This is truly an all-star team in terms of talent that represented New Mexico the right way on and off the field.”

Here is the Lobo Baseball All-Decade Team for the 1990s: 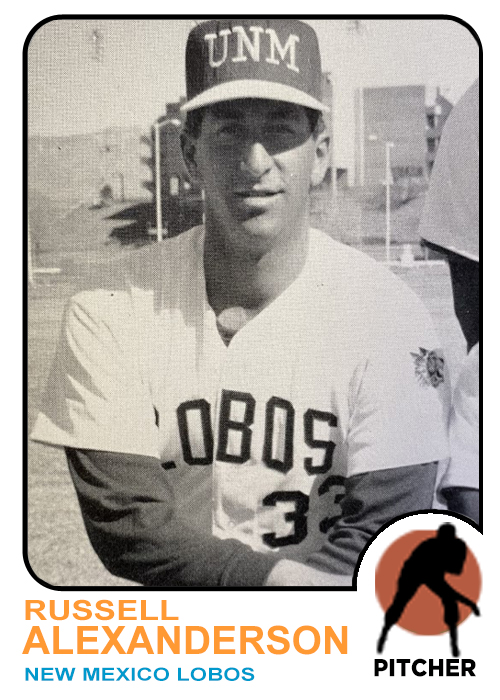 *Second in career complete games with 19 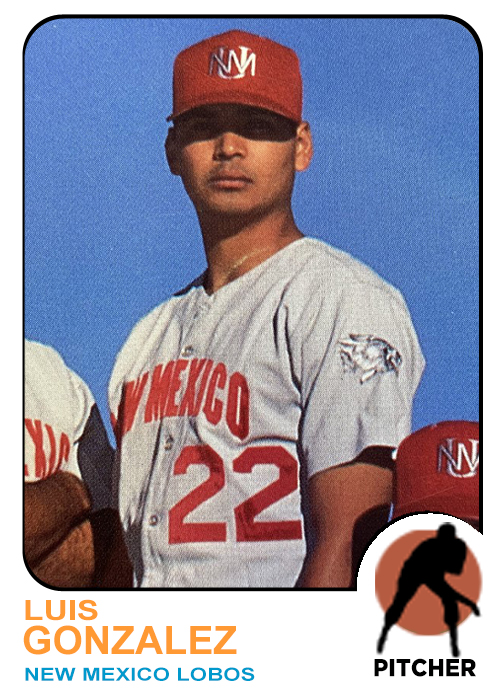 *All-time winningest pitcher in terms of percentage, going 17-5 in his career, good for a .773 mark.

The man with the best winning percentage in school history went a blistering 17-5 in his two-year career.  Leading the team in wins in both of his seasons, Gonzalez was a flamethrower, averaging a strikeout per inning in 1996.  He was a two-time All-WAC honoree who was selected by the Pirates as the 636rd overall pick, going in the 22nd round. 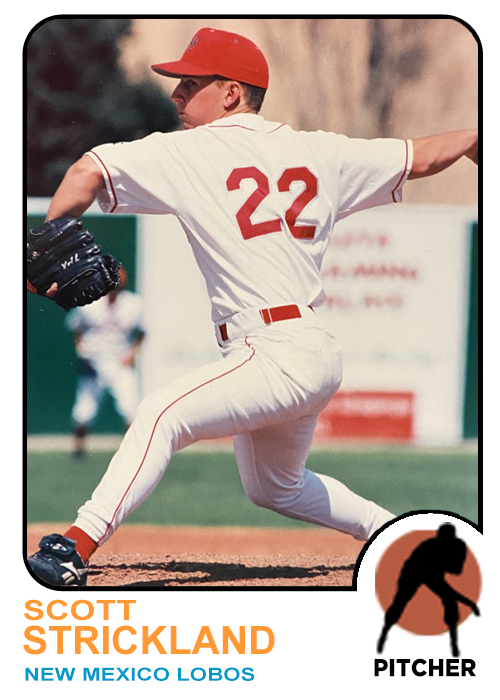 *Led the 1997 squad in complete games with two.

After spending two seasons behind teammate Luis Gonzalez, Strickland got the chance to shine in 1997.  He led the Lobos with a pair of complete games and 59 strikeouts, while also leading the team in ERA among all qualifiers.  He was able to turn that season into becoming a 10th round draft pick by the Montreal Expos, the 316th selection overall. 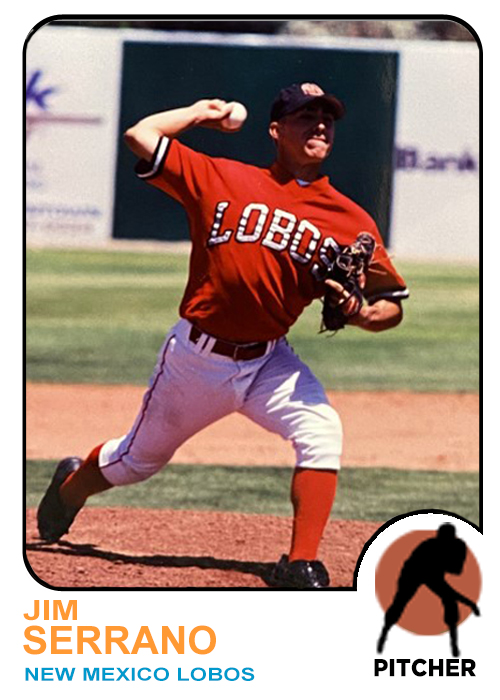 *Tied for the third-most single-game strikeouts, punching out 17 in a win over Point Loma.

Jim Serrano made the most on his lone season with UNM, going 9-5 with a 4.41 ERA and a school record 137 strikeouts in parlaying that into an 18th round selection by Montreal.  Serrano had 17 of those punchouts in one game, a 5-3 win over Point Loma that is third-most in school history and the most in the past 50 years.  Durable, he completed seven contests and threw for 116.1 innings and he is still on 14 single-season top 10 lists at UNM over 20 years after his career. 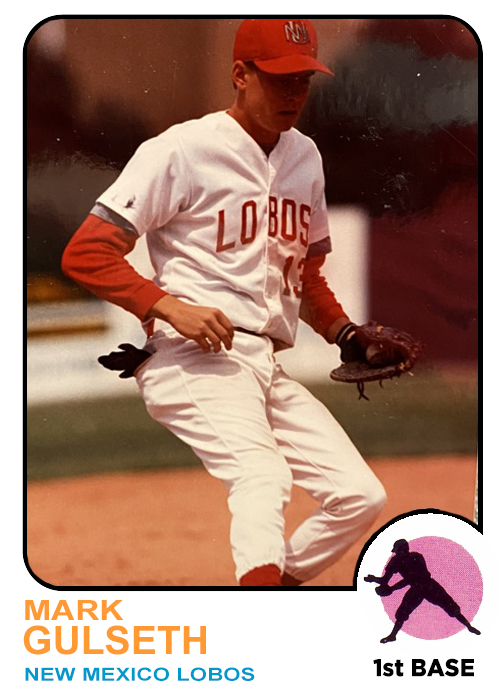 *Only player in Lobo history to hit two grand slams in one game.

*First player to ever ring up 10 RBIs in one game.

*One of five Lobos with over 1,000 career putouts.

*Twice led team in RBIs and HRs in a season.

*Drafted in the 19th round by San Francisco.

Mark Gulseth is more than just one monster game, but boy did he throw in a monster game.  On April 19 against San Diego State in 1992 he hit grand slams in back-to-back at bats as UNM won 13-5.  He earned Collegiate Baseball National Player of the Week for that performance, but it was in 1993 that it all came together, earning All-America honors after hitting 18 home runs and driving in 82 runs.  A player at his best in big moments, he hit .450 in his three postseason tournaments as he was a two-time All-WAC performer.  He was drafted in the 19th round (526th overall) by San Francisco. 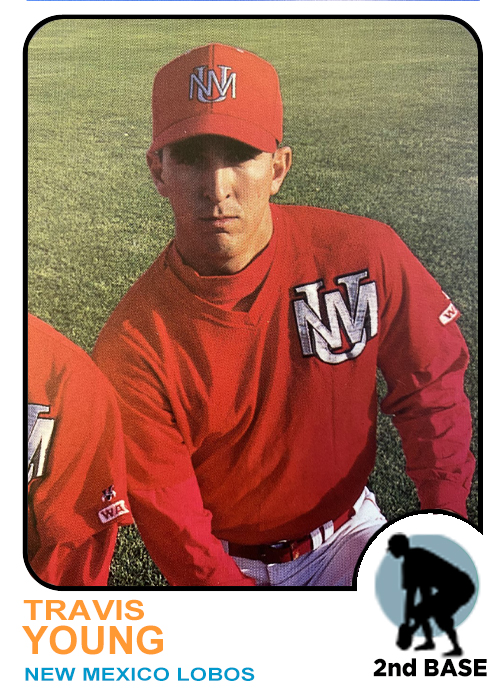 *All-time leader in stolen bases with 127.

*Owns three spots in the single-season top 10 list for steals.

*Is the only Lobo in school history with 60 career doubles and 20 career triples.

Young could do it all, and he is the all-time hit king at UNM, topping out at 340, and since then only once has anyone made a run at that.  The speedster and owner of 20 career triples, he obliterated the school mark for career stolen bases, finishing with 123, 49 more than the previous leader.  Young could do it all and did, at one time or another leading the team for a season in hits, doubles, triples, runs, assists stolen bases and even sacrifices.  He was drafted as a junior after earning Mountain West Player of the Year honors and came back to school as a senior, where he set the hits record. 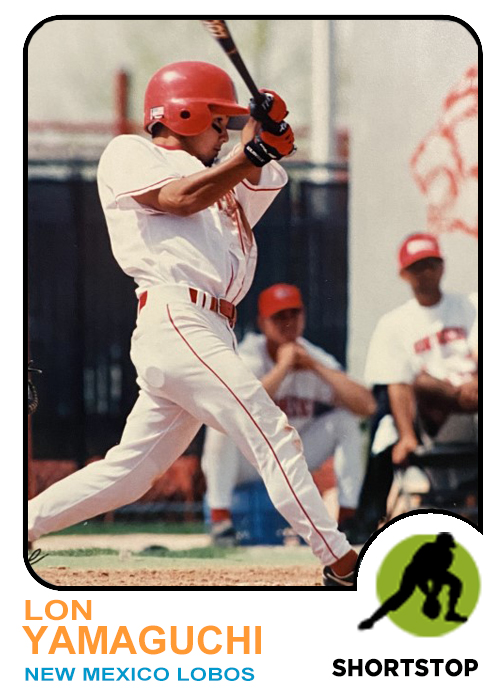 *Career leader in runs scored with 248.

*In 1998 set a school record with 20 home runs in a season, a total that is tied for fourth all-time.

*Second in career total bases with 496.

*1996 WAC Freshman of the Year and named Freshman All-America.

Yamaguchi was a slick-fielding shortstop with a big bat who finished his career on the tops of several batting charts, including single-season home runs.  In 1998, he became the first Lobo to hit 20 home runs in a season.  A power bat with a discerning eye, Yamaguchi is the all-time leader in career walks at UNM with 152, and he turned that ability in scoring a school record 248 runs.  He is the only player in school history to have scored 75 runs in two separate seasons.  When he completed his career, his 203 runs batted in were the most in school history. 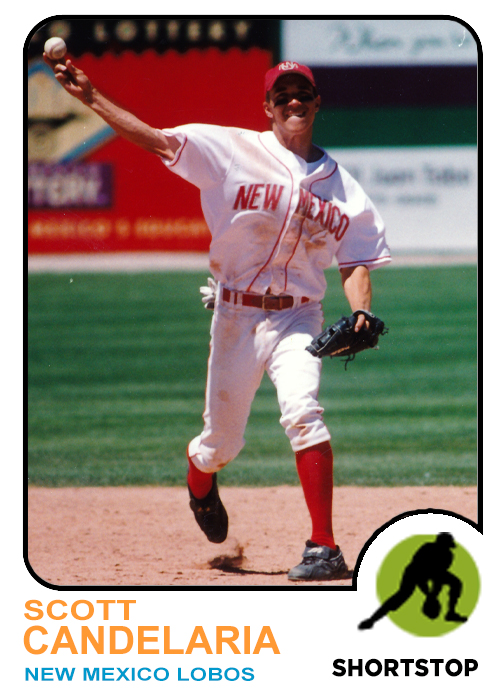 *Sits eighth in career hits with 274.

*His career batting average of .384 is good for fifth all-time at UNM.

*Drafted in the 22nd round by the Milwaukee Brewers.

A rangy shortstop, Candelaria was an exceptional hitter, as his .384 career batting average will attest.  He twice landed in the single-season top 10 for hits in a season with 96 in 1999 and then with 103 in 2000.  He hit in 25-straight over the 2000 season, at the time the third-longest streak in UNM history.  He was a part of UNM’s first Mountain West All-Conference honorees in 2000, and he was drafted in the 22nd round (651st overall) by the Milwaukee Brewers. 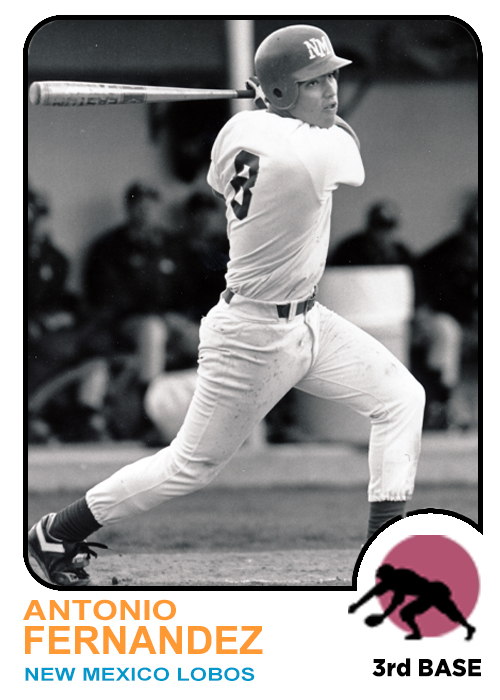 *Turned in one of the greatest single seasons in school history in 1993, with a .430 batting average and a 29-game hitting streak.

Fernandez backed up a terrific freshman campaign in which he earned WAC Freshman of the Year honors into one of the greatest single season in Lobo history, turning in a sophomore campaign that led to WAC Player of the Year honors.  He hit .430 for the 1993 season with a 29-game hitting streak.  He had 10 sacrifice flies in that season (part of his 19 career) and he went 95-for-221 on the season.  He turned on the power his junior season with a team-best 13 home runs, and he was drafted after his junior season by San Diego. 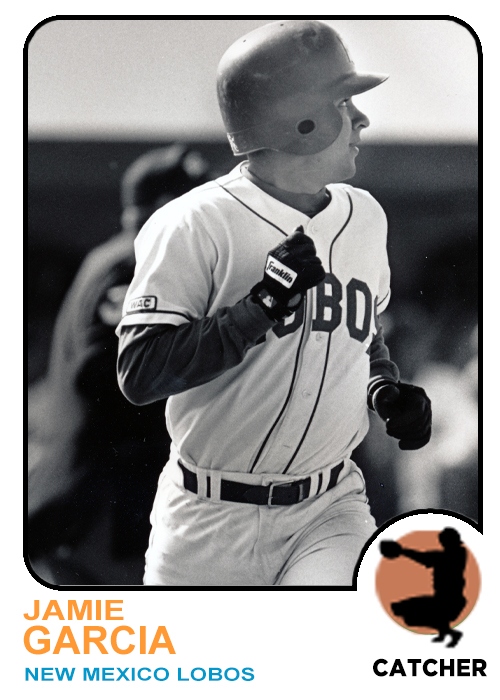 *Drafted in the 25th round by Montreal

*Was a workhorse, starting 101 games in two seasons, almost all at catcher

At any other school, Garcia’s two-year career numbers would have him dotting the record books.  Garcia hit .332 in his 1994 seasons with nine bombs and 54 runs batted in, and he followed that up with a .358 mark in 1995 with 13 home runs and 54 RBI again.  Truly the George Harrison to guys like Antonio Fernandez and Mark Wulpert, Garcia goes down as one of the best defensive catchers in school history with a .987 career fielding percentage.  He could steal a base (he was 7-for-8 in his career) and he had a discerning eye at the plate as well with 43 walks and 19 HBPs.  His solid play was rewarded in 1995 with first team All-WAC honors, and he was drafted in the 25th round (703rd overall) by Montreal after the season. 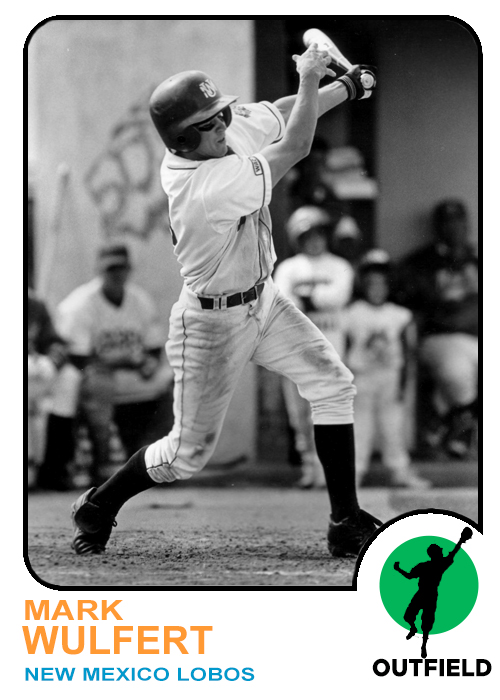 *Has one of 11 all-time cycles, turning the trick against Air Force in 1994

*Hit .441 as a senior, the fifth-highest single-season batting average in school history.

*His slugging percentage of .669 is the sixth-best career mark in school history.

*Drafted in the 11th round (285th overall) by the San Diego Padres.

Wulfert turned in one of the all-time great campaigns in 1995, earning a host of individual honors.  Wulfert was a one-man wrecking crew, leading the Lobos in batting with a .438 average, hits with 88, doubles with 24, home runs with 15, runs batted in with 80, sacrifice flies with seven and stolen bases with 40.  Wulfert was also at his best in big moments, hitting a school record three grand slams, part of his school record five for his career).  Wulfert’s fantastic season earned him a second straight first team All-WAC honor along with being named WAC Player of the Year.  He also earned All-America honors and CoSIDA Third Team Academic All-America honors.  His season was capped off by being selected in the 11th round by the San Diego Padres. 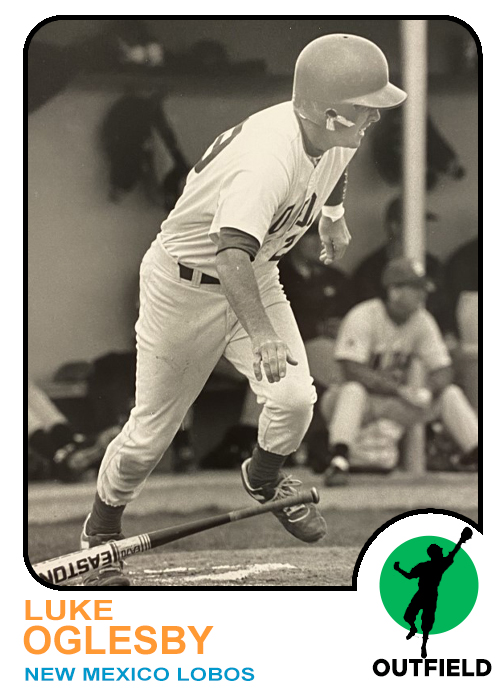 *Drafted in the 26th round by Kansas City.

Another player who got in just one season, Oglesby’s 1993 was one for the books, resulting in All-America honors and a draft selection.  Oglesby, roaming center field, appropriately raced past the UNM record of 33 stolen bases, swiping 56 bags, a total that has not only never been matched, it hasn’t even been remotely challenged.  Those 56 steals in just one season still has him seventh in Oglesby was able to swipe a base because he was almost always on base.  His .508 on base percentage is one of 12 seasons in which a UNM hitter reached half the time, and his total is ninth all-time.  His 1993 season ended with All-WAC honors, teaming with Antonio Fernandez for one of the country’s top hitting duos.  He was drafted in the 26th round (721st overall) by Kansas City. 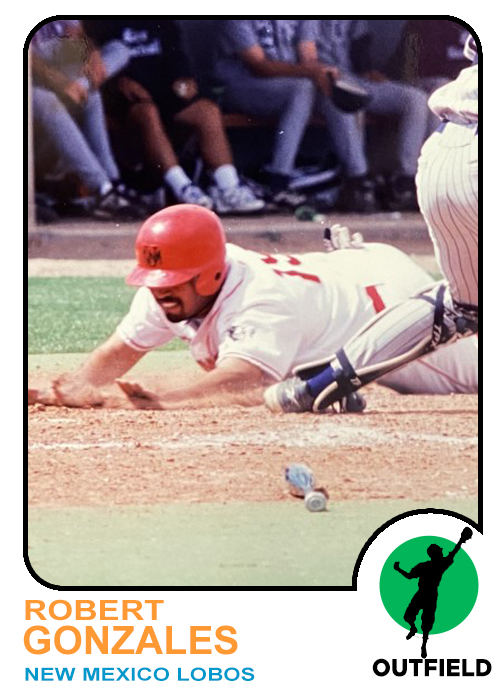 Gonzales was a doubles machine in his two seasons, and he is the only Lobo to set a hitting record for a single season and then best his own mark.  He did it when he connected for a school record 33 doubles in 1997.  The next year, he followed that up by hitting 35 doubles.  Both marks are still sitting 1-2 on the single-season charts.  Gonzales was adept with the bat, hitting for a .397 lifetime clip, the third-highest career average at UNM, and his 1998 season saw him drive in 81 runs, tied for the fourth-best mark all-time.