ALBUQUERQUE, N.M. – For the better part of the most-recent decade, there arguably has not been a more consistent presence in and around the University of New Mexico men’s tennis program than Ben Dunbar. Currently the program’s head coach, Dunbar has been associated with Lobo men’s tennis since the 2008-09 season when he joined the program as a freshman from his home country of England.

Following a standout four-year playing career, Dunbar jumped right into coaching serving as a volunteer assistant with the Lobos for two seasons (2012-13 & 2013-14). Dunbar was then the assistant coach for the next two seasons before taking over the reins of the program in 2016-17.

In his time with the Lobo men’s tennis program, Dunbar has achieved success both as a player and as a coach.

As a coach, Dunbar was an assistant on the 2015 team that won the MW Regular Season Championship. In 2019, just his third season as head coach of the Lobos, Dunbar brought another MW Championship to the program, this time as the head coach, as his team went a perfect 7-0 in league play.

That most-recent championship trophy making its way to the Lobo men’s tennis trophy case is the subject of this week’s Lobo Classics. 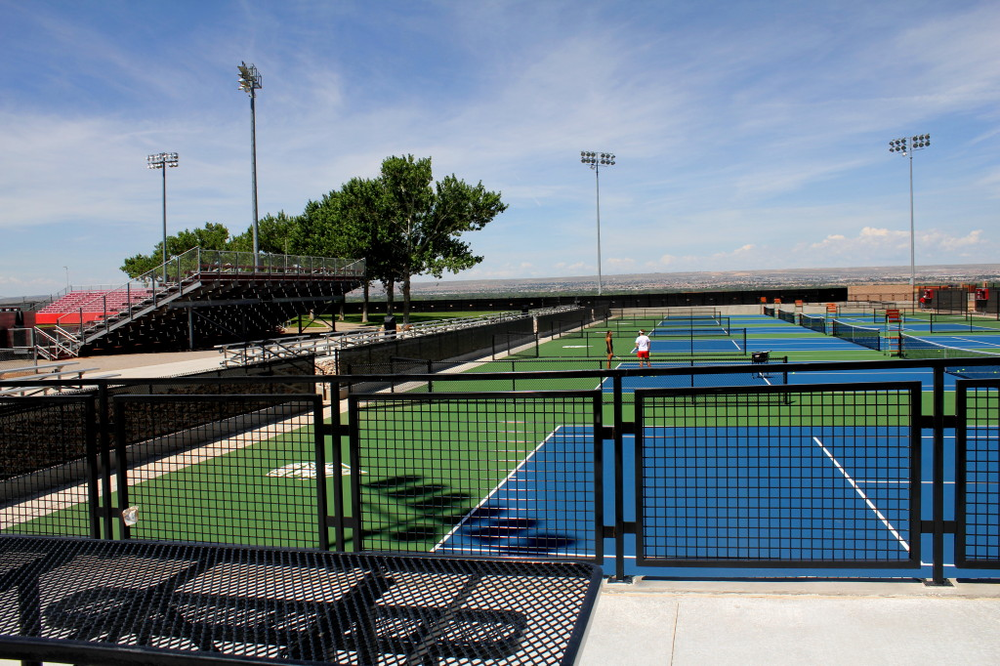 Entering the third year under head coach Ben Dunbar, the Lobo men’s tennis program had improved from year one to year two and appeared primed to continue that upward trend and take the next step in 2019. However, just six matches into that campaign, confidence in that happening easily could have begun to falter as the Lobos opened up 1-5 and were in the midst of a five-match losing streak.

Confidence within the program did not waver any in spite of that start. In fact, it may have even been strengthened because of the difficulty of the schedule and how well the team played against the high-level of competition. Of those early defeats, four of the Lobos’ opponents ended the season ranked in the Top-50 of the ITA National Rankings.

Having played all six of those matches to start the season on the road, the home-opener for the Lobos against Pacific on February 24 was a welcomed sight and sparked the turnaround in the team’s win-loss record.

In that match with Pacific, the Lobos engineered a thrilling come-from-behind victory. After falling behind 1-0 through doubles play, the Lobos once more trailed Pacific 3-2 setting up a best of three down the stretch to determine the winner. After dropping the No. 1 singles match, the Lobos were down to a pair of freshmen in Facundo Bermejo (No. 5) and Casey Recci (No. 6). Both rookies proved to be up to the challenge and won their respective matches to give the Lobos the overall 4-3 team match victory.

With the five-game losing streak now a thing of the past, the Lobos were now poised to go on a run as their next five matches were going to be played at home. In the match following the Pacific thriller, the Lobos faced another difficult opponent in No. 39-ranked Wichita State. In that match, the Lobos grabbed the doubles point to go up 1-0 but then fell behind 2-1 as Wichita State picked up wins at No. 4 and No. 6 singles. The Lobos roared back to take the team match, however, with ensuing wins at No. 3, No. 1 and No. 5 singles.

The Lobos then rode that victory and made quick work of their in-state rivals New Mexico State 4-0. The lone hiccup during the six-match homestand came following the shutout of the Aggies as the Lobos fell to Drake 4-1. The Lobos bounced back their next time out and beat Cal Poly 5-2 to bring their overall record to 5-6 heading into MW play.

First up for the Lobos in league play was Fresno State.

Against the Bulldogs, the Lobos, who were also closing out the aforementioned six-match homestand, jumped out to a quick 1-0 lead in the match as they took the doubles point after victories in No. 2 and No. 3 doubles.

With a victory at home in their Mountain West opener, the Lobos now had to hit the road for their next three conference matches. That road swing would take the Lobos to Nevada, Boise State and Utah State. 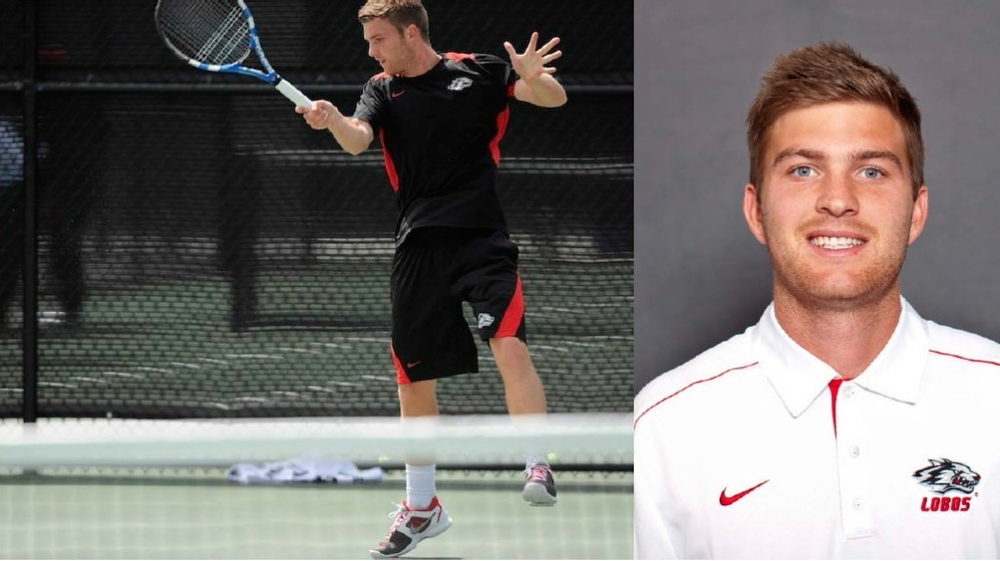 The first road test saw the Lobos hold off Nevada for a 4-2 win. After the Lobos grabbed the doubles point in that match, singles play was tightly-contested. Nevada won the first singles match at No. 5 to even the match. The Lobos then won at No. 3 and No. 2 respectively to push ahead 3-1. A win at No. 6 for Nevada made it a 3-2 match with No. 1 and No. 4 singles still on the court. Both of those matches went to a decisive third set, but a win a No. 1 by Hernandez Tong ended the match.

The Lobos then kept their unbeaten MW record alive as they edged out Boise State 4-3. Against the Broncos, the Lobos once more had a strong showing in doubles play and took a 1-0 lead into singles play. A win at No. 1 singles by Hernandez Tong gave the Lobos a 2-0 lead, but wins at No. 4 and No. 3 by Boise State evened the match.  A 6-1, 6-2 win at No. 2 singles by West pushed the Lobos out in front 3-2, but the match was tied once more with a Bronco win at No. 5.

That set up a winner-take-all finish at No. 6 singles. Playing in that flight that day for the Lobos was freshman Nicolas Prieto. After dropping the first set, 3-6, Prieto forced a decisive third set with a 6-4 win in set two. Even still, the third set was not enough to decide things as it went to a tiebreaker. In the tiebreaker, which had been moved to an indoor venue due to rain in Boise, Prieto edged past his opponent 7-5 for the win.

A mere two days following that thriller, the Lobos headed over to Logan, Utah where they were facing perhaps their biggest test of the conference season in Utah State. The Aggies had established a bit of a stranglehold on the MW over the previous three years as they won regular season championships in 2016, 2017 and 2018 while also winning MW Tournament titles in 2017 and 2018.

While in the middle of the conference slate, it was clear that the MW Regular Season Championship likely hung in the balance as both the Lobos and Aggies entered the match unbeaten in league play each at 3-0.

As they had done seemingly all season long, the Lobos took the early 1-0 lead by grabbing the doubles point. A dominant showing by Hernandez Tong at No. 1 claimed the first singles win for the Lobos and put them up 2-0. Utah State bounced back with a win at No. 2 singles for their first point of the match.

In fact, that ended up being the only point the Aggies would manage against the Lobos that day as Holis at No. 3 and Buttner at No. 4 each won in straight sets to seal the match for the Lobos, 4-1.

With that statement win at Utah State, the Lobos were now the lone unbeaten team in MW play and in a great position for their first regular season championship since 2015.

The next two conference matches brought the Lobos back home where they had played well all year to that point, posting a 5-1 record. That home record improved to an impressive 7-1 over the course of one weekend as the Lobos made relatively quick work of UNLV (4-0) and San Diego State (4-1). The win over San Diego State clinched the Lobos at least a share of the MW Regular Season Championship.

Looking to win the title outright, the Lobos had one final MW opponent in their way in the form of the Air Force Academy.

Playing the match on the road, the MW unbeaten Lobos got all they wanted and then some from Air Force, who was entering the match with just one conference win to their credit.

Unlike most matches throughout the year, the Lobos dropped the double point and entered singles play down 1-0. Singles play then proved to be the epitome of a back-and-forth affair as the two teams traded wins.

The Lobos opened up singles play with a win at No. 5 by Bermejo to even the match at 1-all. Air Force then took the win at No. 1 before a win at No. 3 by Holis evened things up once more, this time at 2-all. The singles wins continued to alternate with Air Force winning No. 6 and the Lobos capturing No. 2 behind the play of Dominic West. The win by West was crucial as it tied the match at 3-all and set up the winner-take-all finish at No. 4.

Playing that flight was Buttner. After a closely-contested opening set went to a tiebreaker, Buttner claimed the set with a 7-3 win in the tiebreaker. Playing as the final match on the court and with the team decision and subsequent outright MW Championship hanging in the balance, Buttner won the second set 6-4 to earn the win.

The Lobos would go on to enter the MW Tournament as the No. 1 seed and after the down-to-the-wire clash with Air Force in the regular season, the Lobos made quick work of the Falcons in the tournament winning 4-0. The Lobos were then upset 4-3 in the semifinals against San Diego State, ending their sensational season. A season that saw the Lobos begin 1-5 and end with a 14-8 overall record, which included the unblemished mark in conference play.

About Lobo Classics
The goal of the “Lobo Classics” series is to highlight some of the greatest moments in the history of UNM Athletics. These types of moments can consist of specific games, individual performances, record-breaking achievements or even entire championship seasons. It is our intention that during this period of uncertainty, we can bring some joy and happiness to our unwaveringly loyal fans that make up Lobo Nation!

As part of this endeavor, Lobo Athletics wants to make this an interactive project and are opening up for suggestions from Lobo fans everywhere. Fans can make suggestions that they would like to see highlighted in “Lobo Classics” by tweeting to @UNMLobos and using the hashtag #LoboClassics. Fans can also submit suggestions through email: newmexicoathletics@gmail.com.