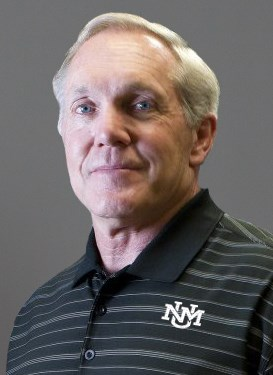 Rocky Long rejoined The University of New Mexico in January of 2020, as he will serve as the defensive coordinator.  He has a long and storied history with The University of New Mexico, dating back to 1969 as a player with the Lobos, through his 11-year stint as head coach of the Lobos.  His first two seasons back with the program he also served as the linebackers position coach, but in 2022 he ceded his day-to-day positional responsibilities, allowing him to oversee the entire defense, although he still helps with the linebacker position.

The defensive unit once again was stellar in 2022, showcasing a tough, hard-nosed and hard-hitting side.   For the third straight year under Long, the defense lowered its total defense yards per game number, and the program has now cut off 125.5 yards per game from when Long rejoined the program.  Last year UNM had a top-30 passing defense, with the program allowing just 202.8 yards per game through the air, finishing 30th, and that comes after inheriting the worst passing defensive team in the nation from 2019.  The passing yardage total is the lowest for UNM in 15 years, since the Lobos allowed 197.4 yards per game in 2007.

In 2020, the Lobo defense regained its reputation as a hard-nosed, hard-hitting unit, nearly tying a long-standing record for sacks in a game, as the unit had eight in the final game of the season against Fresno State.  The defense under Long racked up 13 takeaways in just seven games, more than the previous season’s total of 11 accomplished in 12 games.  The Lobo defense led the Mountain West, allowing just eight touchdowns on 19 red zone chances (42.1%), a mark that was fifth in the FBS (after ranking 115th in 2019).  The unit also improved in total defense, first downs allowed and third-down defense.  UNM picked up its first Mountain West First Team All-Conference selection in four years on defense as Jerrick Reed earned the honor.

Long has UNM bowl eligible for a school record seven straight seasons, and UNM played in back-to-back-to-back bowl games from 2002-04, a first in school history.  Long led UNM to a 23-0 win over Nevada in the 2007 New Mexico Bowl, ending a 46-year bowl victory drought for the school.  Long is the all-time winningest coach in UNM history, and he is second in all-time wins at San Diego State behind Don Coryell.