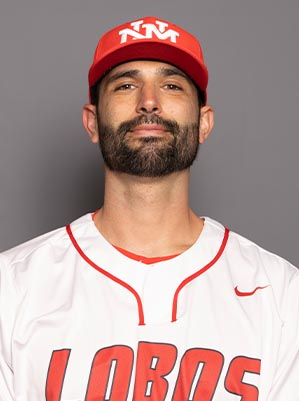 Michael Lopez, who previously served as head coach at Howard Community College in Big Spring, Texas, will kick off his first year with the Lobos for the 2021-22 season as a pitching coach. Lopez joins the Lobo squad after spending two seasons at the helm of the Howard program, bolstering a 48-19 overall record.

Prior to becoming the head coach of the Hawks, Lopez spent three years as an assistant coach under previous head coach, Rob Martinez.

During his time at Howard College, Lopez worked primarily with the pitchers and served as the recruiting coordinator. He has had over 40 players sign with Division I schools during his tenure, three players sign contracts with professional teams, and three players selected as NJCAA All-Americans.

Lopez originally came to Howard College after a one-year stint with a brand-new NAIA program, Marymount California University (MCU). During his one year at MCU, Lopez was named the associate head coach and helped with day-to-day recruiting.

Prior to coaching at Marymount California University, Lopez was the volunteer assistant coach for two seasons at the University of Arizona under head coach Andy Lopez. Lopez assisted with the pitchers during practices and helped run the bullpen during games. Off the field, his job consisted of preparing scouting reports on opposing teams, directing the Andy Lopez Baseball Camp, and assisting with recruiting.

Lopez’s collegiate career in baseball includes four years (2009-2012) at the University of Arizona. Lopez was named captain of the 2012 team, which won the NCAA National Championship in Omaha, Nebraska.

Lopez graduated from The University of Arizona in 2013 with a bachelor’s degree in family studies.