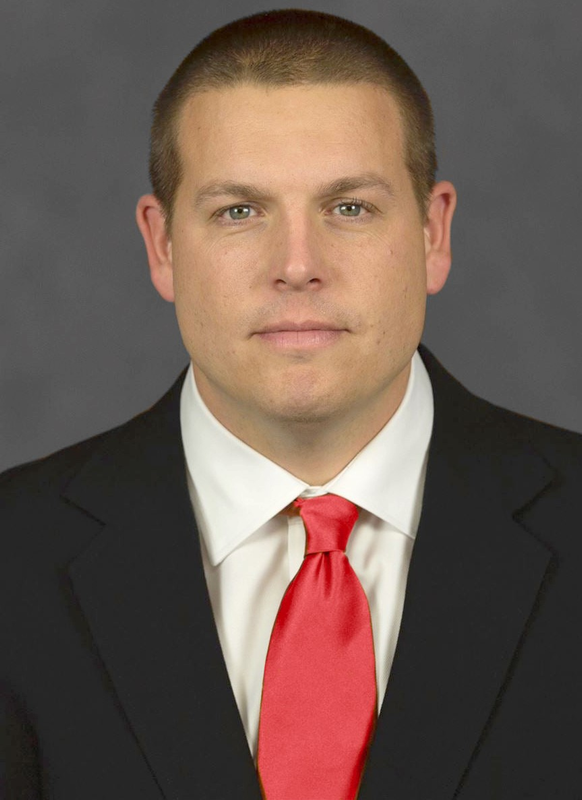 Derek Warehime returned to The University of New Mexico in 2020, and is the offensive coordinator and tight ends coach for the program.  He previously was on staff from 2012-14 serving as the tight ends coach, adding the duties of run-game coordinator in 2014.  He came to Duke City after a three-season stint with the University of Texas, where he helped the Longhorns win three straight bowl games.

The 2021 season was a challenge offensively as UNM started four quarterbacks during the season including a graduate manager in the final game of the season.  One of theose quarterbacks was Terry Wilson, who was named the a Manning Star for the second week of the season when he threw for 381 yards and three touchdowns, going 26-for-37 against New Mexico State.  UNM’s tight ends were superb in 2021, with true freshman Trace Bruckler leading the team in touchdown catches, more of an amazing feat as he was only moved to tight end a few weeks prior to the season.  Overall UNM’s tight ends accounted for six of the 10 receiving touchdowns on the season.

In 2020, Warehime directed an offense that improved nearly a touchdown a game, scoring 23.9 points per contest in conference play. The Lobos moved all the way up to fourth in the Mountain West in total offense, and improving from 10th to fourth in passing offense.  The Lobo offensive unit also improved in passing efficiency (up to seventh from 12th), first downs (3rd up from 7th), third down conversions (4th up from 9th), total third downs made (2nd up from 10th) and total turnovers, as UNM commited just nine in 2020 after a whopping 19 in 2019.

With the Longhorns, Warehime was with the program under Tom Herman for three season, coaching the offensive line in 2017, tight ends in 2018, and then adding special teams coordinator in 2019.  The 2019 season saw Texas’ special teams make great strides.  The punt coverage team ranked 12th, allowing just 3.3 yards per return, and the 30 total return yards ranked 11th in the FBS.  Kicker Cameron kicker converted 77.8 percent of his field goals, the best percentage for a Texas placekicker in seven seasons. Dicker earned honorable mention All-Big XII honors.

Also in 2019, Warehime’s tight ends group was young, but they were a strength.  Cade Brewer ranked third on the Longhorns in yards per catch.

He made the switch to mentor the tight ends in 2018, and his group excelled behind fifth-year senior Andrew Beck, who garnered first team All-Big 12 honors. Beck, who was known as one of the best run-blocking tight ends in the nation, had a career year catching the ball, as well, with 28 receptions for 281 yards and two scores. Behind Beck, sophomore Cade Brewer and true freshman Reese Leitao contributed both offensively and on special teams in 2018.

Warehime’s offensive line group dealt with injuries for much of 2017, including one to All-American left tackle Connor Williams, who missed most of eight games. No Longhorn started all 13 games, with Warehime having to use eight different starting combinations throughout the season. Junior left guard Patrick Vahe led the way with 12 starts, while true freshman Derek Kerstetter started the final 10 games of the season at right tackle and sophomore Zach Shackelford started eight at center.

In his second season with the Cougars, Warehime helped UH to a 9-3 record prior to joining Herman on the 40 Acres. UH had two top-five wins, was the only program to defeat two top-five teams and joined Alabama as one of two programs nationally to beat two top-10 teams by double digits.

The Cougars’ offense finished the regular season ranked 36th nationally and ranked as one of the least penalized teams in the country. The Houston offensive line allowed just 30 sacks on nearly 500 pass attempts in 2016. UH ranked 15th in third down conversions, ninth in first downs and 21st in scoring offense during the regular season.

Under Warehime in 2015, the Houston offensive line used 11 different starting lineups in 14 games due to injury. Despite the injuries, the line led a team that finished the regular season ranked 13th nationally in rushing offense with 235.8 yards per game. Under his leadership, two linemen earned season honors from The American. Both Alex Cooper, who started at three different positions along the line, and Will Noble, a true freshman who had his redshirt removed six games into the season, were recognized by the AAC. The two honorees under Warehime were part of a group that lost three starters to season-ending injuries and endured a total of 34 games lost due to injuries.

Warehime joined the Houston staff after three seasons with New Mexico as the Lobos’ tight ends coach, adding the title of run game coordinator in his final season. In all three seasons with Warehime on staff, the New Mexico offense finished fifth or better in rushing nationally. With him serving as run game coordinator in 2014, the Lobos finished the year ranked fourth nationally in rushing with an average of 310.4 yards per game on the ground. Along with its power on the ground, New Mexico ranked fourth nationally allowing just 11 sacks during the season.

In 2013, Warehime was integral to the offensive line blocking schemes, as the unit paved the way for UNM to average 308 yards per game to rank fourth in the country. It was the second year in a row that New Mexico finished the season in the top five nationally in rushing. His tight ends also became a bigger part of the passing game in 2013, more than doubling their receiving yards from the season prior.

During his first season in Albuquerque, Warehime helped New Mexico become one of the most improved rushing attacks in the country. After finishing 103rd in the nation in rushing in 2011, the Lobos finished fifth in 2012 averaging over 300 yards per game. Under his mentorship, tight end Lucas Reed earned an invitation to the East-West Shrine Game following the 2012 season.

Prior to his time at UNM, Warehime spent two seasons as the offensive line coach at Sam Houston State. In 2011, the Bearkats featured the No. 6 rushing offense in the Football Championship Subdivision, averaging 255.9 yards per game en route to the FCS National Championship Game. SHSU averaged nearly 40 points per game. C Travis Watson and OT Chris Crockett earned 2011 Sports Network/Fathead.com All-America honors under Warehime’s tutelage. In his first season, the Kats led the Southland Conference in rushing and had three players earn All-League honors.

Warehime worked for two seasons as the offensive line and tight ends coach, as well as the strength and conditioning coordinator, at the University of Arkansas at Monticello. He was the offensive coordinator in 2009. UAM led the Gulf South Conference in total offense (499.3 ypg) and rushing offense (244.4 ypg).

A 2006 graduate of Tulsa, Warehime started 34 games at center from 2001-04. He played on the Golden Hurricane’s 2003 Humanitarian Bowl team and was named first team All-Western Athletic Conference in 2004. He spent one season playing professionally with the Tulsa Talons of the Arena Football League.

The Choctaw, Okla. native began his coaching career as a student assistant for the offensive line at Tulsa in 2005. The Golden Hurricane won the 2005 Conference USA Championship and defeated Fresno State in the Liberty Bowl.

Warehime spent the 2006 and 2007 seasons as a graduate assistant for the offensive line at Rice. He was also the assistant video coordinator during that time. The Owls made their first postseason appearance in 45 years and were runners-up in CUSA’s West Division, setting 40 new school records on offense.

Warehime and his wife Kelly have three children: daughters Kaysen and Kylee and son, Miller Hayes.