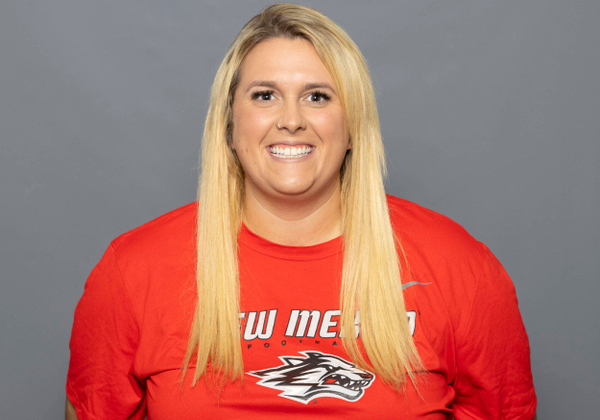 Ashley Nowak joined The University of New Mexico family in March of 2022 and she serves as Associate Director of Equipment Operations – Football.

Nowak in 2022 was one of four women to lead the equipment operations for an FBS program.  She also reorganized UNM’s equipment rooms and handled an influx of new jerseys and uniforms.  She was also instrumental in getting UNM featured on ESPN’s “Geared Up” segment on November 5.

Nowak comes to UNM after spending the last four years at Southern Illinois where she served as the assistant director of equipment operations.  With Southern Illinois she worked with all 16 Saluki programs including the Saluki football program.

With UNM, Nowak will work exclusively with the Lobo Football program, directing all facets of the team’s equipment needs.  Along with handling all of the teams’ gear, uniforms and practice uniforms, Nowak will direct a student staff that is essential in helping run UNM’s practices and training operations.

While at Southern Illinois, Nowak also served as the Track Office Coordinator for the Bloomington Gold Corvettes.  Prior to SIU, Nowak spent a year at William & Mary as an assistant equipment manager.  She earned two degrees from Aurora University earning her bachelor’s in business administration and management in 2015 and her master’s degree in business administration in 2017.

While at Aurora she served at as Head Student Basketball Manager for the men’s basketball team and she spent her postgraduate years as a football team equipment manager for two seasons.