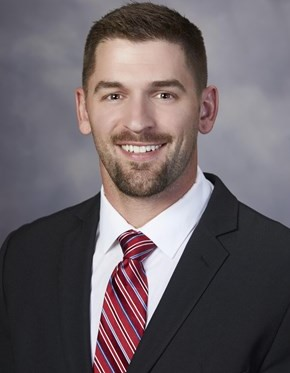 Steve Plourde joined The University of New Mexico in June of 2021 and serves as the Associate Athletic Trainer for the department, and he is the head athletic trainer for the Lobo Football team.  He comes to UNM after four years at SMU as an assistant. He is very familiar with UNM, having served as a graduate assistant with Lobo football in 2015.

With UNM, he will direct all facets of the athletic training program for Lobo Football, including prevention and treatment of injuries and working with Bob Waller and the UNM medical team on prevention, diagnosis and best practices.

He spent four years (2017-21) as an assistant athletic trainer at SMU in Dallas, Texas. Plourde’s primary responsibility was football and men’s golf.  He also served as the Director of the SMU Internship Program and also served as a clinical preceptor in conjunction with the UTA, UI, and UNO Accredited Sports Medicine Programs.

Prior to SMU, Plourde spent two seasons as an intern athletic trainer for the Oakland Raiders from 2015-2017. He received his bachelor’s degree in athletic training from the University of Nebraska in 2013. He also earned his master’s degree in sports administration from the University of New Mexico in 2015, while serving as a graduate assistant athletic trainer for the football team.  He also assisted with UNM golf, skiing, baseball, men’s basketball and track and field.

Plourde holds two certifications from the National Academy of Sports Medicine as a Corrective Exercise Specialist and Performance Enhancement Specialist.  He has an advanced certification for dry needling for orthopedic rehabilitation and sport performance. He also holds certifications in CPR and AED from the American Heart Association. Plourde is originally from Abilene, Texas.  He and his wife, Amanda, have a daughter, Nora, and a dog, Nyla.