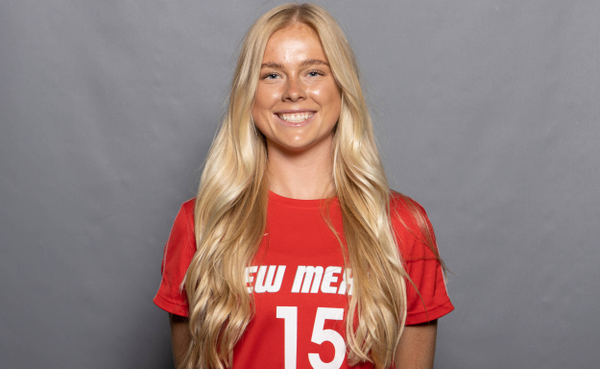 REDSHIRT JUNIOR (2020): Started and played in all 13 matches, totaling 796 minutes … scored one goal and added an assist on the season … tied for seventh on the team in scoring with three points … picked up an assist against Air Force … scored UNM’s first goal, tying the Mountain West final against San Diego State at 1-1 … named Mountain West All-Academic and Mountain West Scholar-Athlete.

SOPHOMORE (2018): Started in all 21 games … made her first collegiate start on August 17 versus Texas Tech … registered first career points on September 7 versus UTEP … tallied a goal and assist the 2-1 win … netted a total of four goals on the season, tied for fourth-most on the team … played a total of 1,387 minutes on the season.

FRESHMAN (2017): Named to Academic All-Mountain West Team … played in 17 of the 22 games for the Lobos … clocked 383 minutes … saw her first collegiate field time in the August 20 win against Grand Canyon … had six shots, and two on goal during the season … had a season high of 48 minutes against Nevada on September 24.

HIGH SCHOOL/CLUB: Floth helped lead Keller High School to a 22-3-2 mark and the Texas Class 6A state semifinals this past season under coach Billy Fiffths … was selected honorable mention All-Area for the DFW area and selected the District 3-6A Utility Player of the Year … named First Team All-District 6A-1 since her freshman year and helped Keller High School reach the Class 6A Texas regional finals her freshman year … was named District 6A-1 Midfielder MVP as a junior … been a part of the National Honor Society from 2015-17 … plays club for Dallas Texans ECNL and helped the team reach the ECNL national playoffs from 2014-16.