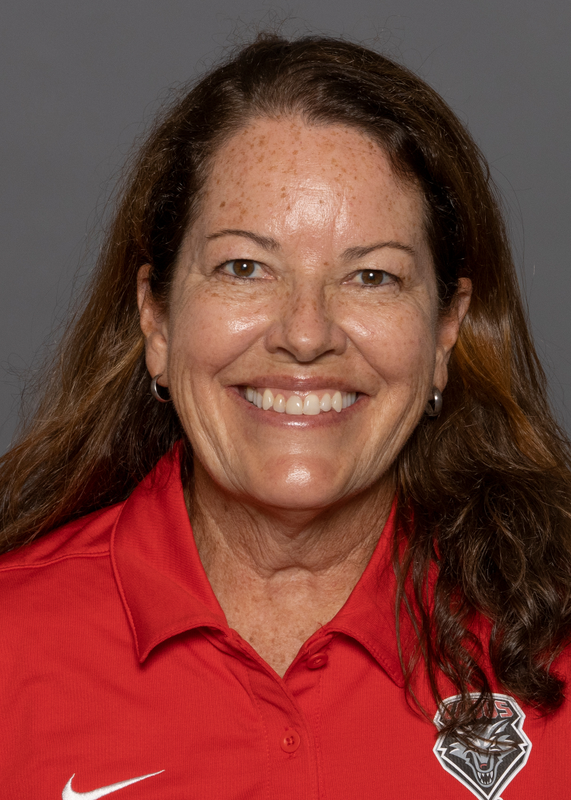 Jill Trujillo enters her 16th season as the head coach of The University of New Mexico women’s golf program in 2022-23. A UNM graduate, Trujillo became the ninth head coach in 2007. She is recognized as one of the top teaching professionals in the country and is one of the elite educators of the game.

Success on the course and in the classroom have been the hallmarks of Trujillo’s tenure at UNM. In 2021-22, the Lobos led the nation with a 3.96 GPA, their fourth straight year with the best GPA of any women’s golf program in the country. New Mexico hosted a NCAA Regional, with Jenny Lertsadwattana and Lauren Lehigh competing in the event. Six Lobos were recognized with Women’s Golf Coaches Association (WGCA) All-Scholar Team honors, the most in the Mountain West.

Trujillo earned her third Mountain West Coach of the Year honor in 2020-21 after leading the Lobos to a conference-record ninth Mountain West Championship and guiding freshman Myah McDonald to Mountain West Freshman of the Year honors and leading sophomore Lauren Lehigh to tie for first at the 2021 MW Championship. Academically, Trujillo’s squad finished atop the nation in GPA for the third straight season with the 2020-21 Women’s Golf Coaches Association (WGCA) All-Scholar Team Award. The team posted an outstanding 3.993 overall GPA after recording the second-highest GPA in Lobo women’s golf history of 4.02 in the spring semester. It marked the fifth straight semester for UNM with a GPA over 3.90 and the 38th semester over a 3.0.

Additionally, six Lobos earned WGCA All-American Scholar honors under Trujillo’s tutelage in 2020-21 and all 10 Lobos on the squad were named to the 2021 Mountain West All-Academic Team and the 2020-21 Mountain West Scholar Athlete list. All impressive stats considering the season marked the return to the course and classroom following a complete shutdown of the 2019-20 season due to the COVID-19 pandemic.

In 2018-19, Trujillo’s squad continued to build upon its academic prowess as she guided it to the 2018-19 WGCA All-Scholar Team Award, marking the highest GPA in the nation among all schools. The Lobos posted a collective average team GPA of 3.903 marking the 36th straight semester that UNM women’s golf has registered above a 3.0.

Additionally, the team’s Spring 2019 GPA of 3.94 marked a new UNM program record for the highest GPA in a single semester. Under Trujillo’s guidance, five players earned WGCA All-American Scholar honors on the season while six players were named Mountain West All-American Scholars. On the course, the 2018-19 season was highlighted by a fifth-place finish at the annual home tournament, the 40th Branch Law Firm/Dick McGuire Invitational, where the team shot four over, 868 and was led by senior Darian Zachek who finished tied for second individually.

The 2017-18 season was one for the books as Trujillo oversaw her team card eight top-10 finishes, including a fourth-place finish at the Mountain West Championship to bring the season to an end. The season saw two Lobos, junior Darian Zachek and senior Ingrid Gutierrez, earn appearances at NCAA Regional competition. UNM earned public recognition from the NCAA as women’s golf had an APR in the top 10%, while five Lobos were honored by the Women’s Golf Coaches Association (WGCA) as All-American Scholars and five as MW All-Scholars.

During her tenure at UNM, Trujillo has guided the Lobos to five Mountain West team titles and five MW Individual Tournament Champions. She has 12 NCAA Regional and three NCAA national postseason appearances under her belt. Trujillo has seen 20 players on MW All-Conference teams and three MW Players of the Year.

Under Trujillo’s influence, the Lobos have earned public recognition for the sixth straight year in 2018-19 for their Academic Progress Rates (APR) in the top 10% by the NCAA. During her time as head coach, 52 golfers have been honored as All-American Scholars and for 38 straight semesters, the team finished with at least a 3.0 GPA. Since 2007, the squad has been named to the WGCA All-Scholar Team GPA Top-25 10 times, including the #1 spot in the country in 2014-15, 2018-19, 2019-20 and 2020-21. Additionally, Trujillo has guided 68 players to receive Mountain West All-Scholar Athlete honors throughout her tenure at UNM.

“I am so proud of the young ladies who become Lobos and accept the challenge of our program,” Trujillo said. “We develop golfers who have a chance to succeed on the professional level, but we also see them contribute as vibrant members of society. It’s really an honor for me to be able to coach these types of student-athletes.”

Trujillo’s teams are big on giving back to the New Mexico community. They have a free golf clinic for women every year and they have raised thousands of dollars and/or volunteered for local charities such as the Animal Humane, St. Jude Children’s Research Hospital, Pancreatic Cancer Action Network, Ronald McDonald House, Special Olympics, Juvenile Diabetes Research Fund, Habitat for Humanity, Kids First, Children’s Cancer Fund of NM and Royal Readers.

“New Mexico is my home. I was born and raised here and our people are the most valuable resource we have,” Trujillo said. “We take care of each other and having my team involved with local charities is of the utmost importance to me.”

Trujillo was recognized in 2014 as the Ladies Professional Golf Association (LPGA) Teaching and Club Professional (T&CP) 2014 Central Region Coach of the Year. She also won the award in 2007 and 2009. In addition, she was named the Mountain West Coach of the Year for women’s golf in 2008, 2014 and 2021.

Not only has Trujillo guided the Lobos to success at the collegiate level, but she has also sent players to the LPGA, Symetra and LET tours, as well as the Olympics during her time at UNM. Trujillo’s Lobos of 2009-10 set a school-record 72-hole total of 1,189, finishing 16th at the NCAA Championships. That squad was paced by now-LPGA standout Jodi Ewart, who became the first student-athlete in any MW sport to be named Player of the Year four times. Ewart, a three-time All-American, twice named to the First Team, won her third MW Individual Championship as a senior setting a school record with five career titles. She was also named the MW Female Athlete of the Year, which included all sports. Ewart also represented Great Britain in the 2020 Tokyo Olympics (in August 2021), along with Manon de Roey who represented Belgium.

Before joining the UNM staff, Trujillo was the head golf professional at the Isleta Eagle Golf Course south of Albuquerque. She was responsible for the overall operations at the course from 1996 to 2003, and was the tournament director for numerous events, including the Futures Golf Tour, the PGA Junior Series and the AJGA Southwestern.

While working at Isleta, Trujillo earned numerous accolades, including the 1997 Sun Country Section PGA Merchandiser of the Year, the 2001 Junior Golf Leader award and the LPGA Central Section Professional of the Year in 2000 and 2002. Additionally, she was named one of Golf for Women Magazine’s Top 50 teachers in the United States in 2002 and 2003. Trujillo served as the assistant golf professional at The University of New Mexico Championship Course from 1990 until August of 1996.

Trujillo was a member of the Lobo women’s golf team from 1986-90 and won the 1988 New Mexico Women’s Amateur. She has more than 29 years of experience as a golf professional and is a Class A member of the PGA of America and the LPGA T&CP. Trujillo also serves on the UNM Alumni Lettermen Board of Directors.

The Silver City, N.M., native graduated from UNM in 1990 with a bachelor’s degree in business administration as an accounting major.