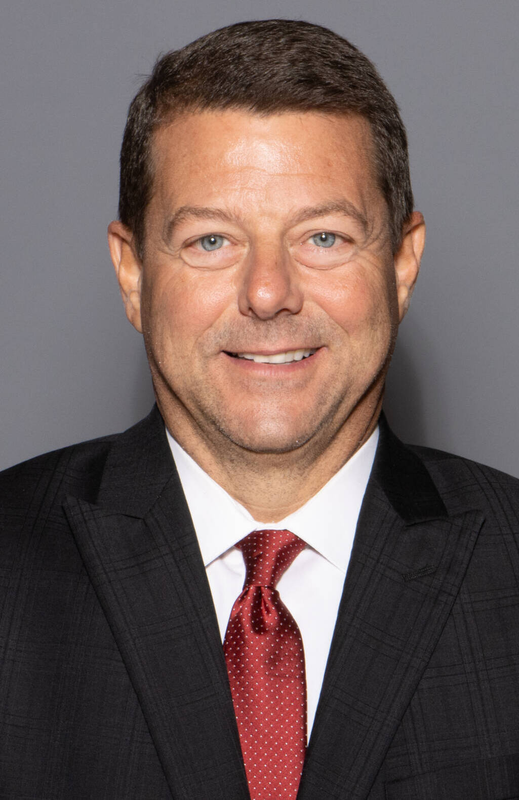 Additionally, Bradbury became just the second coach in UNM history to win 100 games with a win over Grambling on Nov. 30, 2021.

UNM added six postseason Mountain West honors with a conference-high three all-conference players in Antonia Anderson, Shaiquel McGruder and Jaedyn De La Cerda, an honorable mention in LaTora Duff, an all-defensive player in McGruder and an all-freshman in Paula Reus. The Lobos have had 12 conference selections in the last two seasons.

In the 2020-21 season, Bradbury led the Lobos to a Mountain West regular season championship, the first outright in program history and the first regular season title since the 2004-05 season. In addition, the Lobos were selected for the WNIT for the third time in four years.

The Lobos produced one of the most prolific offenses not only in the conference, but in the country, finishing among the top 25 in several categories. Among them, UNM finished fourth in the NCAA in made three-pointers per game (10.2), sixth in assist-turnover ratio (1.40), ninth in scoring offense (81.2 points per game), 14th in fewest turnovers per game (12.0) and assists per game (16.8) and 22nd in scoring margin (12.7). The Lobos led the Mountain West in scoring offense, scoring margin, assists per game, turnover margin, assist-turnover ratio and made three-pointers as well as second in field-goal percentage and steals per game.

As a result of UNM’s successful season, five players were named to the All-Mountain West Team with LaTascya Duff also earning the superlative of Sixth Person of the Year. Duff was just the second Lobo to win the sixth person award. Making the all-conference team for the first time were Duff, Jaedyn De La Cerda and Antonia Anderson, as well as Shaiquel McGruder earning all-defensive and Ahlise Hurst earning the honorable mention distinction.

In his third year at the helm, Bradbury continued to put his mark on the program while also continuing to bring Lobo women’s basketball back to national prominence. Overall, Bradbury’s 2018-19 team went 24-7 and earned a bid to the WNIT for a second-straight season. It marked the first time since the 2008-09 – 2009-10 seasons that the program made consecutive trips to the postseason. 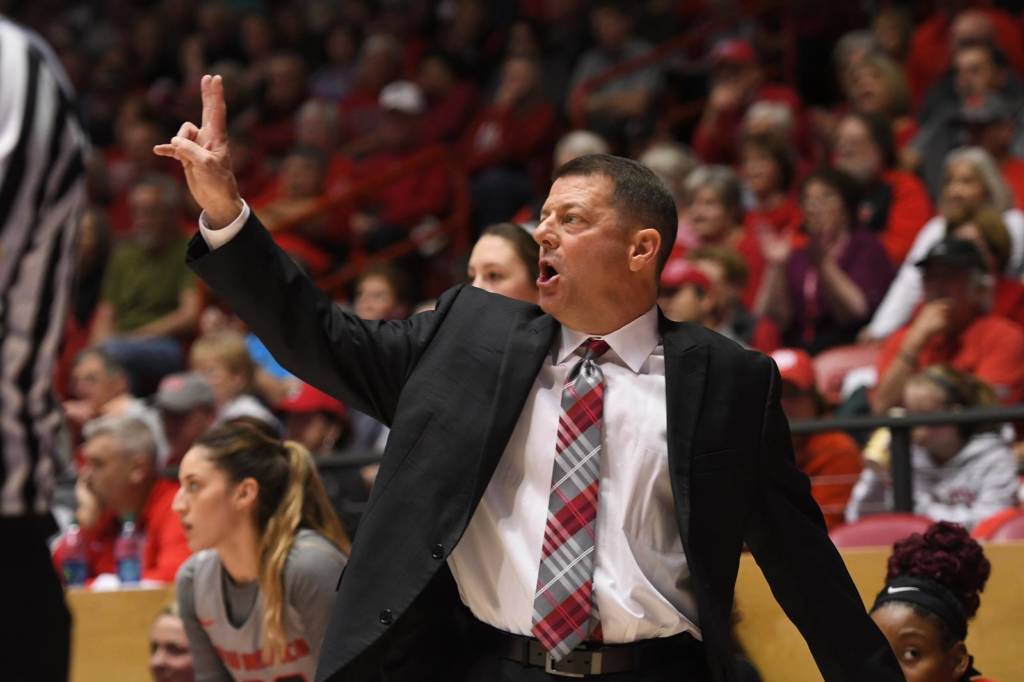 After dropping a one-possession game to Auburn in the preseason WNIT, the 2018-19 Lobos ripped off 11-straight wins to tie the program record and were on the cusp of cracking the national top-25 rankings as well by receiving votes from the WBCA during that stretch. Bradbury would also receive an individual plaudit from the WBCA last season as he was named as one of 13 finalists for the 2019 United States Marine Corps/WBCA National Coach of the Year Award. Impressively, Bradbury was the only coach from a non-Power 5 conference to be a finalist.

In his time at UNM, Bradbury has coached 13 All-Mountain West performers with Cherise Beynon, Jayla Everett, Jaisa Nunn, Aisia Robertson and Richelle van der Keijl joining De La Cerda, Duff, McGruder, Hurst and Anderson in making the All-Mountain West Team. Tesha Buck, Mykiel Burleson and Nike McClure have also earned MW recognition with Buck being the 2017-18 Newcomer of the Year, Burleson being named to the All-Freshman team in 2016-17 and McClure landing on the All-Defensive team in 2018-19.

Further, a Lobo has been named Mountain West Player of the Week 15 times during his tenure, with three named Freshman of the Week.

In year two under Bradbury the Lobos had a breakout season, especially offensively as they ended the 2017-18 season averaging 80.4 points per game while also posting an impressive +9.7 scoring margin. Both marks led the Mountain West and the point-per-game total was 16th-best in NCAA DI last season.

A significant reason for the jump in offensive production was the fact that the Lobos were one of the most potent three-point shooting threats in the country. For the season, the Lobos attempted the eighth-most overall trifectas in DI hoisting 932 long distance shots. Successful 34% of the time, the Lobos made the 11th most 3’s burying 319. 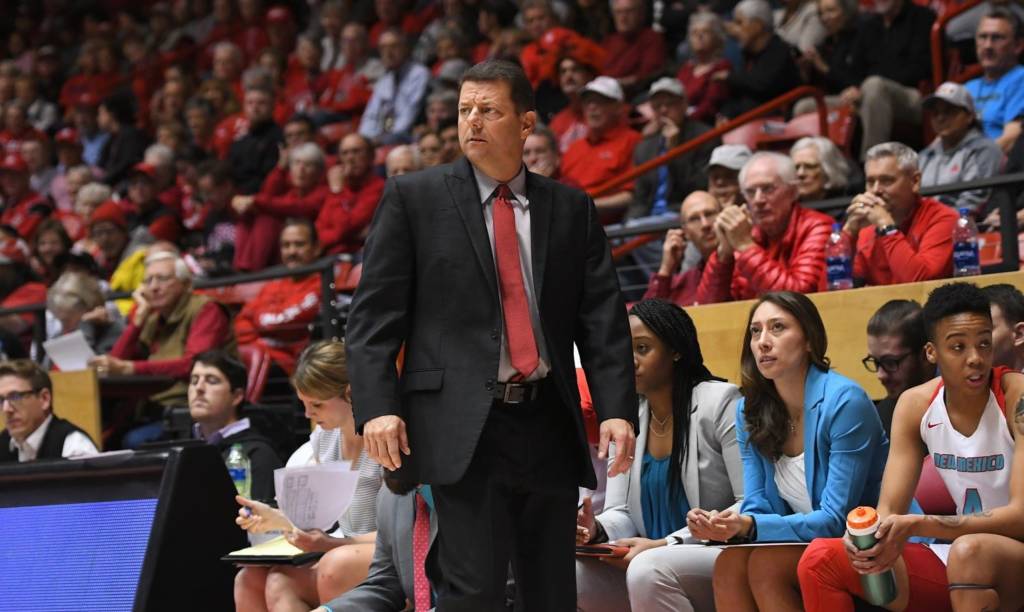 Prior to coming to Albuquerque, Bradbury built a successful nine year run as a Division-I head coach with stops at Morehead State (Morehead, Ky.) and Wright State (Dayton, Ohio). Most recently with the Raiders, Bradbury led his squad to five 20-win seasons, including each of his final three seasons. During that time, Wright State has amassed a 75-28 record, the best amongst the 13 Division I programs in the state of Ohio.

His most prominent three-year run at Wright State started in 2013-14, when the Raiders won a school-record 26 games on the way to a 26-9 season and the program’s first-ever appearance in the NCAA Tournament. That season saw the Raiders finish second in the Horizon League and win its first Horizon League Tournament. It also featured the program’s first road win at perennial league power Wisconsin-Green Bay. Kim Demmings was named the Horizon League Player of the Year and Tournament MVP, and it marked the first time in school history the program had a pair of first team All-Conference selections.

He followed up that by earning Horizon League Coach of the Year in 2014-15 after a 25-9 season that saw his squad lose its Horizon League Preseason Player of the Year less than two minutes into the season opener. The Raiders just missed a second straight NCAA Tournament appearance, falling in overtime in the conference championship game. The team did make its first appearance in the Women’s NIT as the league’s automatic qualifier, and in 2015-16, the team made it back-to-back WNIT appearances after a 24-11 season, earning the program’s first at-large bid.

Those three seasons are the three winningest seasons in the history of Wright State women’s basketball. 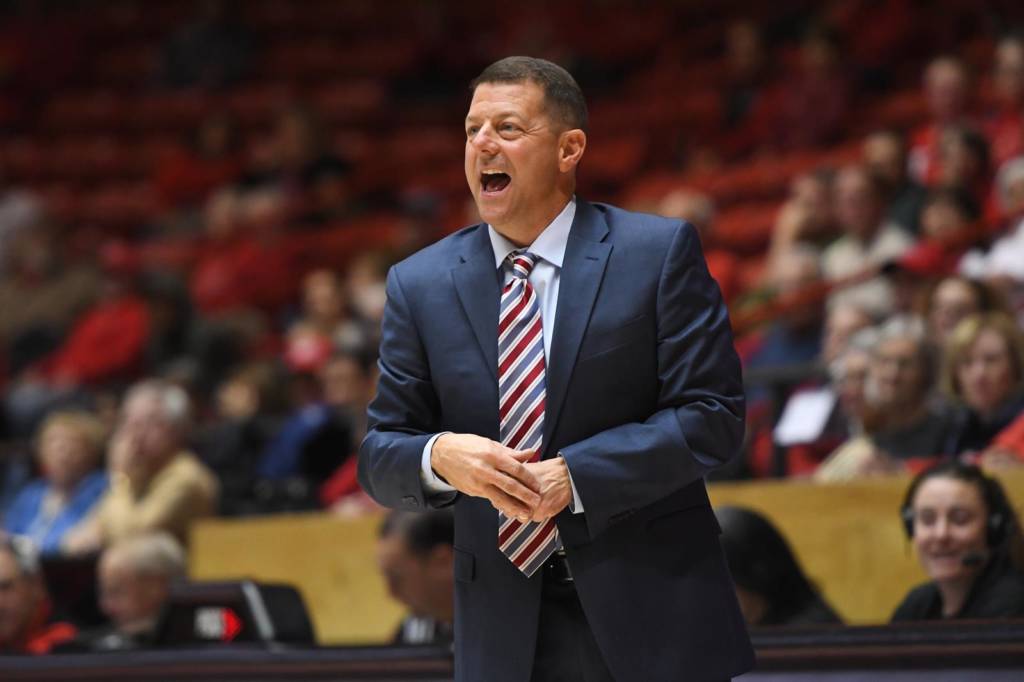 In his first two seasons at Wright State, he led the team to a 20-13 campaign and a 21-13 mark and berths in the Women’s Basketball Invitational, the first NCAA Division I postseason berths for the program. Overall, Bradbury has coached three Horizon League Players of the Year (all in his last three seasons), six first-team All-Horizon League players, three second-team members and four All-Freshman team members.

Prior to his time at Wright State, Bradbury was the head coach at Morehead State where he led the Division I program to a 50-44 mark in three seasons, including a watershed 22-11 season, which was the second-most wins in Morehead State history and the most wins by the Eagles in the previous 38 years.

What They Are Saying About Mike Bradbury
“Mike is one of the top up and coming young coaches in the country. He’s a proven winner with a tremendous work ethic. There is no question in my mind that he will build a championship program at New Mexico.” — Ohio State women’s basketball head coach Kevin McGuff

“Mike has an innate ability to develop chemistry on his teams. Recruiting and strategy are critical to success in every program, but finding the right students that allow for tremendous chemistry on a team make the difference between good and great. The Lobos better be ready to play well into March for the foreseeable future under Mike’s leadership.” – Morehead State Director of Athletics Brian Hutchinson

“New Mexico has made an outstanding hire in Mike Bradbury. Mike is a tireless recruiter with a great reputation, not only for his ability to recruit, but also his ability to develop and coach players. He is going to play an exciting and entertaining style of basketball that will allow them to be successful and their fans will love. I have no doubt that Mike will work extremely hard, not only coaching his players, but in the community of Albuquerque, as they have one of the best fan bases in all of women’s basketball.” – Louisville women’s basketball head coach Jeff Walz