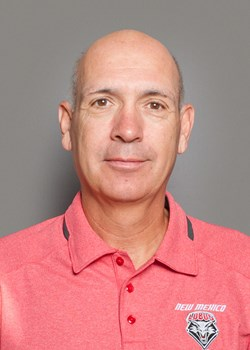 After 24 years as head cross country & track coach at Miami (Ohio) University, where he was multiple time Mid American Conference Coach of the Year, and having earned NCAA Mid-East Coach of the year from the United States Cross Country & Track Coaches Association, Rich Ceronie begins his eighth year on Joe Franklin’s staff.

The 2017 season was another successful year for Ceronie and his athletes as he coached a young group of Lobos. The men’s 4×400 meter relay team broke the 34-year-old school record in the event at the Don Kirby Invitational indoors, while also claiming All-Mountain West honors in the process. He also helped Kyra Mohns to All-MW honors in the 400 hurdles, helping her transition from a full-time heptathete to a veritable multi-event athlete.

In 2016, Ceronie again guided New Mexico’s relays to tremendous success, including All-Mountain West selections in the men’s 4×400 relay both indoors and outdoors. He also coached the men’s 4×100 to the school record in the event. Holly Van Grinsven also set the school record in the 60-hurdles, while also earning all-conference honors in that event. Additionally, Ceronie tutored the women’s 4×400 team to All-MW status.

2014 was arguably the best year the Lobo sprinters ever had under Ceronie, as he coached scorers and NCAA qualifiers at an unprecedented rate. Between 60-meter school-record holder Kayla Fisher-Taylor, Aasha Marler and Haley Sanner on the women’s side and Charles Lewis, Chris Kline and Ridge Jones on the men’s, Ceronie helmed the Lobos’ sprints/hurdles crew to 22 scoring efforts at the Mountain West Championships. Of those performances, Sanner (second in 400 outdoors), Marler (second in 60 indoors) and Lewis (second in 400 indoors, top three in 400, 400 hurdles and 4×400 relay outdoors) stand out as highlights. Ceronie was also able to coach Lewis to the NCAA Championships in the 400 hurdles, where the Albuquerque native earned Second-Team All-American honors as the first Lobo to compete in the event at a national championship since the mid-1970s.

In 2013, Ceronie was able to coach the women’s 4×400 meter relay team to a second-place finish at the Mountain West Outdoor Championships, as the team finished with the school’s second-best time of all time. The men’s sprinters, under the guide of Ceronie, also contributed at the conference meets, with Ridge Jones, Kendall Spencer and Chaz Lewis all earning All-Mountain West honors at the indoor championships.

His second season at New Mexico saw the Lobos’ sprinters shine. Shirley Pitts won the MW indoor title in the 400 and claimed an All-MW honor outdoors, while the women’s relay teams both placed third at the MW indoor championships. The women’s 4×400 also set the indoor school record twice during the season. Men’s sprinter Beejay Lee also exploded onto the scene, setting the school record in the 60-meter dash. He added a MW title in the 200 at the indoor meet, and posted runner-up finishes in the indoor 60, outdoor 100 and outdoor 200. Marin Schweigert also performed strongly at both championships, placing fourth indoor and second outdoors.

In 2011, his first year a New Mexico, Ceronie coached two of his men, Chaz Lewis and Yusuf Muhammad, to second- and third-place finished in the 400-meters hurdles at the MWC Outdoor Championships, with one, Lewis, qualifying on to the NCAA regional championship and the USA junior track championships. He also coached Marin Schweigert to a scoring effort in the high jump at the MWC Indoor Championships.

While at Miami University, Ceronie produced three U.S. Olympic Trials qualifiers, 4 conference athletes of the year, over 60 conference champions, and 13 NCAA All Americans. He was the first Mid American Conference coach to have an athlete win an NCAA Championship and rank No. 1 in the world. His teams were consistently ranked among the best in the conference winning almost 70% of all competitions in that 24 year tenure.

For the last three years, Ceronie served the City of Albuquerque as meet director for the USA Indoor Track & Field Championships. During 2014, he again will lead the city in hosting this prestigious meet. He also serves as meet director for all Lobo home track & field meets and during the last two years there has been record attendance. In 2011 Ceronie was honored by the City of Albuquerque as “Ambassador of the Year” for bringing increased revenue to the city. Over the course of the last two years Ceronie has been responsible for bringing over 3.5 million dollars in direct spending to the city.

Coach Joe Franklin on Ceronie, “Rich and I have been friends for many years as my teams at Butler University often competed against Miami University. His organizational abilities will help our program and city as we continue to become a mecca of indoor track & field. His expertise as a former head coach and having coached every track & field event will help our program to have great flexibility as we go into the future.”