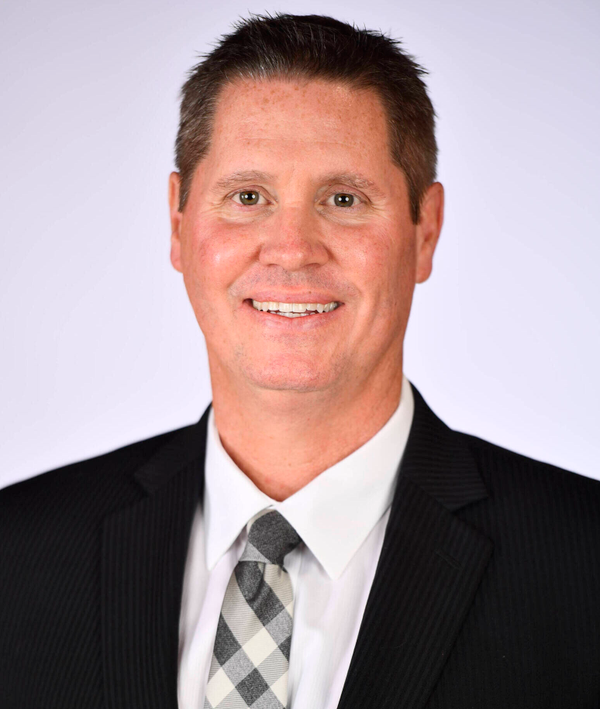 Eric Brown is in his second season at New Mexico and brings over 20 years of Division I coaching experience to the Lobos. As an assistant coach, Brown has coached four NCAA tournament teams at four different programs.

While at Arizona State, Brown served as assistant coach for the 2019-20 team that posted its first seven-game Pac-12 win streak since the 1980-81 team won 11 straight. The squad went 20-11, after being picked to finish sixth in the annual preseason media poll, and took down No. 22 Arizona and No. 14 Oregon on its way to the Sun Devils’ third straight 20-win season for just the third time in program history.

In his tenure at UNLV, Brown helped bring in a recruiting class for the 2017-18 season that was ranked as high as No. 12 in the country and included McDonald’s High School All-American Brandon McCoy. While at UNLV, Brown also recruited Shakur Juiston (2016 National JC Player of the Year), Bryce Hamilton (Two-time First Team All-Mountain West), Ethan Anderson as well as local talents Noah Robothom, Nick Blair and Marvin Coleman.

He helped the 2017-18 team to a 20-win season, marking the first for the Runnin’ Rebels in four years, as part of a nine-win improvement over the previous season. With Brown on staff, the Runnin’ Rebels also performed well academically, setting program records with a 3.17 grade point average for spring 2018.

In his nine years at Long Beach State, Brown helped the 49ers to three Big West Conference regular-season titles, three NIT appearances and a spot in the 2012 NCAA Tournament. During that three-year conference run, Long Beach State posted a league record of 43-7.

Brown spent his time with the 49ers serving as offensive coordinator where he helped the team finish second in the conference in points per game while leading the league in 3-point percentage.

As a recruiter at USC, Brown signed three players that were ranked in the top 100 nationally as well as 2004 McDonald’s All-American Robert Swift. In the 2007 NBA Draft, Brown had two players he recruited earn spots with NBA teams. Nick Young was a lottery pick by the Washington Wizards while Gabe Pruitt went in the second round to the Boston Celtics.

While at Iowa State, Brown coached a pair of all-conference selections (Curtis Stinson and Will Blaylock) while helping the Cyclones to the top of the Big 12 in scoring. Blaylock was a second-round pick in the 2006 NBA Draft while Stinson was the 2011 NBA D-League Most Valuable Player.

In his time at CSUN, Brown helped lead the Matadors to their first NCAA Tournament appearance in program history in 2001. In his three years, he coached eight All-Big Sky players including the 2001 Big Sky MVP (Brian Heinle) and 2001 First Team Big Sky point guard Markus Carr. That season, Carr led the nation in assists per game.

Brown lettered four years at Grant High School in Van Nuys, Calif. and played one year at Valley College in 1993. He received his bachelor’s degree in sociology from CSUN in 1998.

Brown began his coaching career at Grant High (1995-97). While there, he coached a pair of all-city players, including former Washington Wizard guard and NBA All-Star Gilbert Arenas. From there, he served as an assistant coach at Los Angeles Valley College in 1998 where he helped the Monarchs to a 22-10 mark. Brown recruited five players from the 1998 L.A. Valley team who went on to play for NCAA Division I schools.

Brown and his wife, Stephanie, have two daughters and two sons.