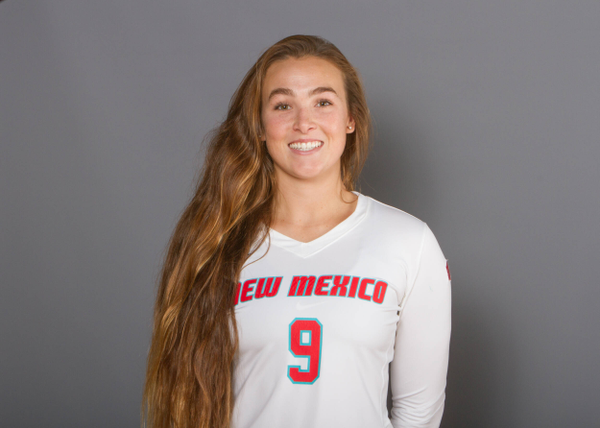 NEW MEXICO
SENIOR | 2018: Appeared in 85 sets through  22 matches, starting in 18… Finished the season with 153 kills (1.80 k/s), which was the fifth-most kills on the team… Posted a hitting percentage of .210… Recorded double-digit kills in five matches, including a season-high 13 kills versus Furman and against Nevada to tie her career high… Set a career high in attacks at North Florida with 42… Registered a career-high six digs against Furman… Opened the season with 10 assisted blocks versus Grand Canyon, which was a career high and season best… Finished the season with 54 total blocks, three solo and 51 assisted… Also had 24 digs, three assists and accounted for 181 points (2.14 points per set)… Named MVP of the Lobo Classic.

BEACH VB
Finished with a record of 25-38 record … The 25 wins rank ninth all-time in career wins.

SENIOR | 2019: Compiled a 10-14 record while predominately playing at the No. 3 court … Was paired with Joey Benson … Finished the season 4-1 with wins over Texas A&M-Corpus Christi, Santa Clara and Ottawa University Arizona (twice).

JUNIOR | 2018: Registered an 8-15 record, placing mostly out of the No. 4 position … Saw action in the No. 3 (1-1), No. 4 (5-12) and No. 5 (2-2) positions on the season, with 14 matches played with Mercedes Pacheco … Opened the season playing with Emily Nenninger before pairing up with Abbey Willison … With Willison, earned three straight wins over Abilene Christian, Grossmont and Houston Baptist … Paired up with Pacheco to close the season, earning victories against Colorado Mesa, Abilene Christian and Benedictine

SOPHOMORE| 2017: Posted a 7-9 record for the Lobos in her first season of collegiate beach volleyball … Played throughout the bottom of the lineup, logging a 6-2 record in the No. 4 slot … Saw action with four partners, playing 10 matches with Jackie Baro … Opened her season with a sweep of Benedictine, and added a sweep of Texas A&M-Kingsville … Went 3-1 with Chloe Crappell, including wins over Lincoln Memorial and Air Force … Also added wins over Colorado Mesa and UT Martin

HIGH SCHOOL
A three-time All-State selection for her team at Bosque School in Albuquerque … Three-time First Team All-District and All-Metro … Also selected to North All-Star team for the North-South 4A All-Star Game in 2014 … Led her team to the New Mexico 2A State Championship match three straight years (2011-13), winning the title in 2012 … Set the school record with 335 kills in her senior season and holds the school record with nine blocks in a single match … Also had 109 digs as a senior … Played club ball with New Mexico Juniors.