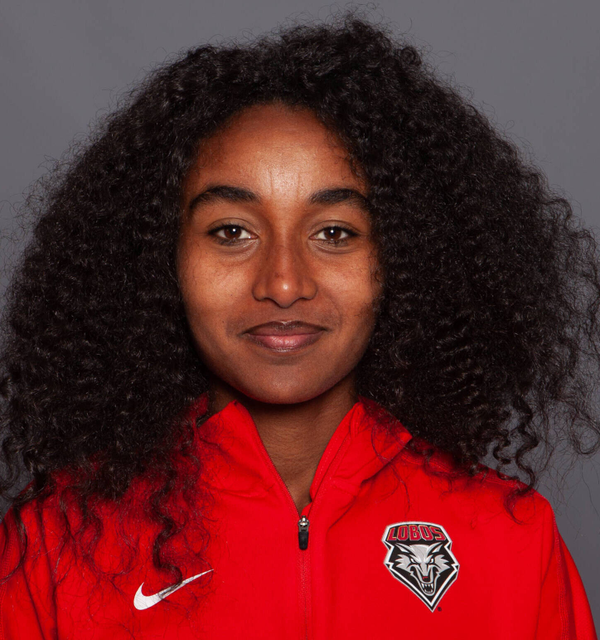 2019-20
Became the most decorated All-American in program history with 13 All-America honors.
2019 XC: Honda Sports Award winner for Cross Country, becoming just the second Lobo to win in cross country and the third in UNM history …  NCAA individual champion after completing the 6K championship race in 19:47.5, with a margin of victory of 9.6 seconds … won consecutive NCAA Mountain Regional titles in 18:58.7, winning by 57.2 seconds … defended her Mountain West Championship with a time of 19:11.2,  breaking the MW record by 26 seconds and finished 49 seconds ahead of the runner-up finisher … won the Blue Division race at the Joe Piane – Notre Dame Invitational with a time of 16:01.61, finishing 12.12 seconds ahead of the runner-up finisher, Alicia Monson of Wisconsin … finished second at the Nuttycombe Wisconsin Invitational with an overall time of 19:48.6 … named the USTFCCCA National Women’s Athlete of the Year … named a Honda Sports Award finalist for the second straight year … twice named the MW Women’s Peak Athlete of the Week (Oct. 8, Oct. 22) … twice named the USTFCCCA NCAA Division I National Athlete of the Week (Oct. 7, Nov. 4) … named the MW Women’s Conference Athlete of the Year for the second straight year … earned All-Mountain West Cross Country First Team … earned USTFCCCA Cross Country All-Region … picked up her third cross country all-America honor … became UNM’s second individual cross country champion in program history.
2020 Indoors: Ran the final leg of the DMR at the Mountain West Indoor Championships that won in 11:02.10 … DMR time was the fourth-fastest time in school history … earned Mountain West All-Conference in the DMR … qualified for the NCAA Championships in the mile, the 3000-meter, the 5000-meter and the DMR … finished sixth in the 3000-meter at the NYRR Millrose Games in 8:54.66 as one of only two collegiate runners … won the mile race at the UNM Team Open in 4:32.66 (altitude converted), winning by 7.9 seconds …ran the fourth-fastest time recorded in collegiate indoor history in the 5000-meter at the Boston University Sharon Colyear-Danville Season Opener with a time of 15:14.71 to finish third overall and second among collegiate runners … her time set the school record as well as the MW record in the indoor 5000-meter … named Mountain West Women’s Indoor Track and Field Student-Athlete of the Year … named to The Bowerman Preseason, Mid-Indoor and Pre-NCAA Indoor Watch List … named MW Track Athlete of the Week three times.

2018-19
2018 XC: Kelati was the top-finisher for the Lobos in the five races she competed in … posted three individual wins and two runner-up finishes … was twice named the Mountain West Women’s Cross Country Athlete of the Week and earned the NCAA Division I Women’s National Athlete of the Week by USTFCCCA on Oct. 15 … finished runner-up at the Nuttycombe Wisconsin Invitational, completing the 6K race with a time of 19:35.9 … won the women’s White race at the Wisconsin Pre-Nationals with a time of 19:33.3, 12.5 seconds before the next finisher … won her first Mountain West individual title with a time of 19:49.3 and a winning margin of 18.1 seconds … was named Mountain West Women’s Student-Athlete of the Year … won the NCAA Mountain Regional by a margin of 16.7 seconds, crossing the line at 19:15.0 … recognized as the Mountain Region Women’s Athlete of the Year … earned USTFCCCA Cross Country All-Region … finished runner-up at the NCAA Cross Country Championship, posting a time of 19:45.3 in the 6K race, leading the team to a second-place finish … earned her second All-American honor … finalist for the Honda Sports Award for cross country.
2019 Indoors: Set the UNM school record in two events … set the school record in the mile with a time of 4:33.35 at the UNM Team Invitational on Jan. 26 and then broke that record at the Mountain West Indoor Track and Field Championship with 4:31.70 … set the school record in the 3000-meters at the Millrose Games on Feb. 9 with a time of 8:53.98 … ran 15:32.95 for a runner-up finish in the 5000-meter final of the NCAA Indoor Track and Field Championships to earn First-Team All-America honors … added a 9:02.44 result in the 3000-meter finals at the NCAA Indoor Track and Field Championships for a third-place result and another First-Team All-America honor … set the MW meet record on Friday evening with a 4:42.26 in the mile preliminaries and improved on her time in the final by 4.51 seconds to win the event in 4:37.75 … was part of the distance medley relay that ranked seventh in program history with a time of 11:18.98 at the Mountain West Championships … was twice named the Mountain West Athlete of the Week (Jan. 29 and Feb. 12) … named the Mountain Region Women’s Track Athlete of the Year by the USTFCCCA.
2019 Outdoors:  Competed in five meets with three wins on the season … NCAA Champion in the 10,000-meters after winning with a facility record time of 33:10.84 … finished fifth in the 5000-meter at the NCAA Outdoor Championships, posting a time of 15:54.46 … added two First Team All-America honors … named the USTFCCCA Mountain Region Women’s Track Athlete of the Year … qualified in the 10,000-meter and the 5000-meter at the NCAA Outdoor Track and Field Championships … finished sixth in the 5000-meter at the Payton Jordan with a time of 15:23.77, which ranks as the fourth-fastest time in UNM history … broke the school  and MWC meet record in the 10,000 with a time of 32:09.10 ran at the Mountain West Championships … won the MW title in the 10,000-meter for her first conference title … posted the fastest time in the NCAA on the season in the 5000 at 15:23.46, which she ran at the Bryan Clay Invitational on April 17 to set an APU and Bryan Clay Invitational record.