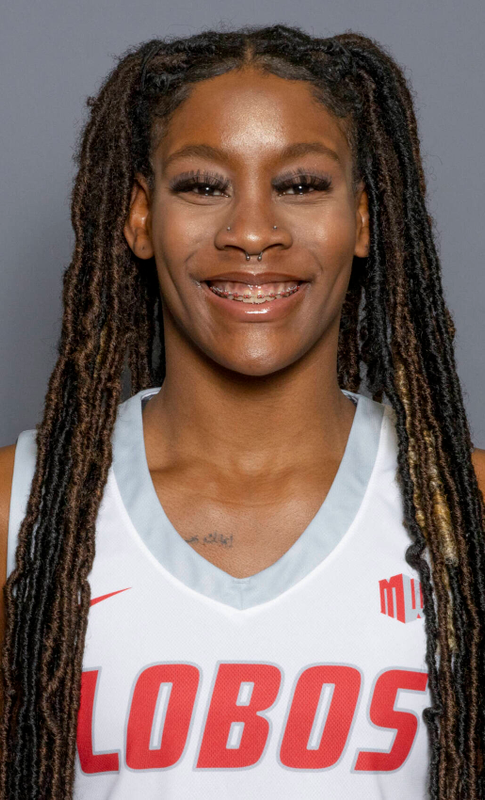 SENIOR (2021-22): Named to the MW All-Conference and All-Defensive teams… played in all 36 games with 34 starts… led the MW in field-goal percentage at .608… finished fourth in the MW in steals per game at 1.83 per game, as well as second in blocked shots and blocked shots per game (49/ 1.36), 13th in scoring (14.2 points per game) and 10th in rebounds per game (7.2)… scored in double figures in 25 games, including last four, and seven games with 20-plus points… scored 30 points against Prairie View… seven double-doubles on the season… led the MW in field-goal percentage (.611) and blocks (30)/ blocks per game (1.7), was 12th in scoring (14.4 ppg) and rebounds per game (7.3), ninth in steals per game (1.6) in conference games… recorded multiple steals in 20 games, with a season-high six steals against Grand Canyon… recorded at least one steal in 28 games, including in every conference game but five… had at least one block in 23 games, including twice registering five blocks (against UTEP and San Diego State), a game with four blocks, five games with three blocks and five games with two blocks… nationally, was sixth in field-goal percentage… led the team in steals, rebounds and made baskets, second in scoring and blocks…led the Lobos in scoring in nine games, tied for the team high in two games… 219 made field goals were the third most in a single season in program history… her .608 field-goal percentage is the second best in a single season in program history… 258 rebounds were the eighth most in a single season in program history… 49 blocks were the 10th most all-time in a single season as was her 66 steals… her 512 points this season were the ninth most in a single season in program history… received conference recognition on Monday, Dec. 20 with the MW naming her Player of the Week, her first career weekly conference honor.

FRESHMAN (2018-19): Appeared in 26 games, all off the bench, for the Lobos in her true freshman campaign … shot 57% overall from the floor (33-of-58) and averaged 2.8 points per game … hauled in 71 total rebounds and averaged 2.7 rebounds per game … pulled down a game-high 13 rebounds in her collegiate debut against Texas State (11/9/18) … had her best overall game against Air Force (1/2/19) as she narrowly missed out on a double-double after having nine points on 4-of-4 shooting from the floor and nine rebounds … had seven games with five or more rebounds.

HIGH SCHOOL/CLUB: Finished her high school career at Trotwood-Madison High School in Trotwood, Ohio and previously played at Wayne Memorial HS … three-star recruit ranked as the #19 forward in the 2018 class by ESPNW … averaged 25.8 points and 9.4 rebounds per game for Trotwood-Madison HS as a senior … led Wayne to two-consecutive Greater Western Ohio Conference (GWOC) titles as a sophomore and junior and also led Trotwood-Madison to a GWOC title as a senior … was named GWOC East Division Player of the Year and All-Ohio Second Team as a junior and GWOC South Division Player of the Year and All-Ohio First Team as a senior … played for Sports City U program out of Ohio.

PERSONAL: Born on October 13, 1999 … daughter of Quiana … goes by Shai (shy) … lists drawing as a hobby … favorite food is chicken alfredo … favorite movie is The Lovely Bones … majoring in family service at UNM.