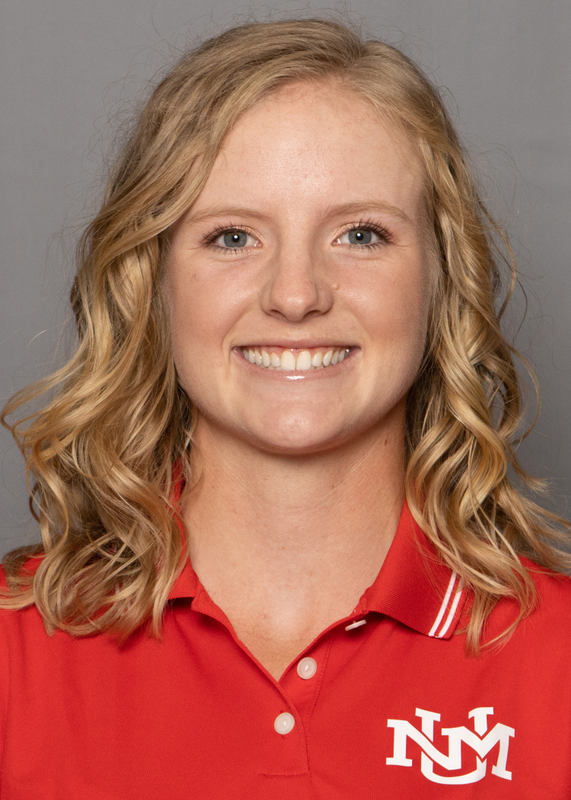 SOPHOMORE (2020-21): Named a 2020-21 Women’s Golf Coaches Association (WGCA) All-American Scholar … competed in seven of UNM’s eight tournaments on the season … tied for first at the 2021 Mountain West Championship (73, 72, 72; +1), falling in the playoff, to lead the Lobos to the title … registered the second-best scoring average for UNM on the season, 75.00 … led UNM in a pair of tournaments including the MW Championships and PING/ASU Invitational … best round of 71 came twice, at the Arizona Wildcat Invitational and the PING/ASU Invitational … 20 of her 21 rounds counted in the team lineup for a team-high 95.24 percent rounds counted … named to the 2020-21 Mountain West All-Academic Team … named a 2020-21 Mountain West Scholar Athlete.

FRESHMAN (2019-20): Honored as a 2019-20 Women’s Golf Coaches Association (WGCA) All-American Scholar … saw action in all seven tournaments for the Lobos in her inaugural season … had 19 of her 21 rounds count toward the Lobo team score … Posted a 76.33 stroke average … registered a season-low 71 at the Branch Law Firm/Dick McGuire Invitational … recorded her top finish at the Rebel Beach Invitational where she tied for 32nd … named 2020 Mountain West Academic All-Conference … named a 2019-20 Mountain West Scholar-Athlete.

HIGH SCHOOL: Took home first place at the 2019 Colorado Junior PGA Championship … named 2018 Junior Golf Alliance of Colorado (JGAC) Player of the Year … ranked #1 by the JGAC in 2018 after carding three wins, seven runner-ups and three third-place finishes … 2018 Colorado Girls Match Play Champion … was one of 12 girls worldwide to be named to the 2018 Transamerica Scholastic Junior All-America Team … earned the 2018 Colorado Hall of Fame Future Farmers Award … was the 2017 Individual 4A State Champion and led her team to capture the 2017 4A State Champion title …  repeated the success in 2019 where she took home both another individual and team title at the 5A State Championship … graduated high school summa cum laude as she was ranked 26/397 in her class.

PERSONAL: Born on Jan. 28 in Loveland, Colo. to parents Mitch and Karen Lehigh … graduated from Loveland High School in 2019 where she was a four-time golf letterman under coach Bill Stephens … enjoys fly fishing, fly tying and painting … favorite athlete is Justin Thomas … favorite food is chocolate … favorite movie is “Top Gun” … chose UNM for the competitive nature of the team, the facilities and the accommodating coaching staff.