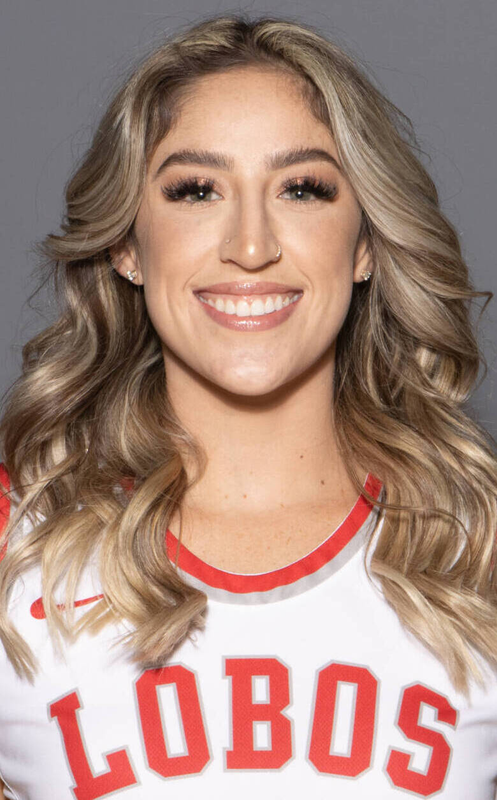 SENIOR (2020-21): Started all 20 games, averaging 28.1 minutes per game, 15.0 points per game, 5.2 rebounds per game, 0.9 steals per game and 0.2 blocks per game … scored in double figures in 17 games, with 20-plus points in six games including the last two games of the season … twice finished with 28 points (at UNLV and against California Baptist) … recorded her first double-double with 13 points and 11 rebounds at Arkansas-Pine Bluff, finishing with a career high in rebounds … led the Lobos in scoring in four games and tied for the team high in one game … led the team in rebounding in five games … made five three-pointers in two separate games (at UNLV, vs. Fresno State) … led the team in scoring with 300 points and in points per game, in field-goal attempts (245) and made field goals (107), and in free-throw percentage (.857) … third on the team in made three-pointers (32) and in rebounds (104) and rebounds per game … fifth in the MW in points per game and in field-goal percentage (.437), but led the conference in free-throw percentage … named to the Mountain West All-Conference Team.

SOPHOMORE (2018-19): Played in 30 games and made five starts for the Lobos as a sophomore … a scoring catalyst off the bench, De La Cerda set a program record for points off the bench as she scored 31 points vs. San José State (2/27/19) … in the game against San José State, De La Cerda buried seven three-points to set a personal game-best … tied as the team’s fourth-leading scorer on the season averaging 7.6 points per game … overall shot 37% from the field (82-of-221) with nearly half of her field goal makes coming from beyond the three-point line … also averaged 2.9 rebounds per game and 1.5 assists per game.

FRESHMAN (2017-18): Appeared in 13 games off the bench for the Lobos as a freshman … scored a season-high seven points in the season-opener against Northern New Mexico (11/15/17) …also registered three rebounds, a block, and two assists in that game – all are single-game career bests.

HIGH SCHOOL/CLUB: Played basketball for Roswell High School in Roswell, N.M., where she was a four-year varsity basketball and volleyball standout … 2016-17 New Mexico Gatorade Player of the Year … was a 2016 All-State honoree and Adidas All-American … led her team to the 2016 New Mexico 5A State Championship in 2015-16 where she scored 34 points, grabbed 10 rebounds and dished out six assists … three-time district MVP … was ranked #221 by ESPNW … averaged 16.9 points, 3.0 assists and 2.8 steals in her senior season … also named district MVP in volleyball and lettered in track … competed for New Mexico-Colorado Elite.

PERSONAL: Born Sept. 6 in Roswell, N.M. to Tara and Willie De La Cerda … has two siblings Deyton and Addycen … majoring in psychology … hobbies include hanging out with friends and family … favorite athlete is Russell Westbrook … favorite food is spaghetti and fries … favorite movie is Glory Road.