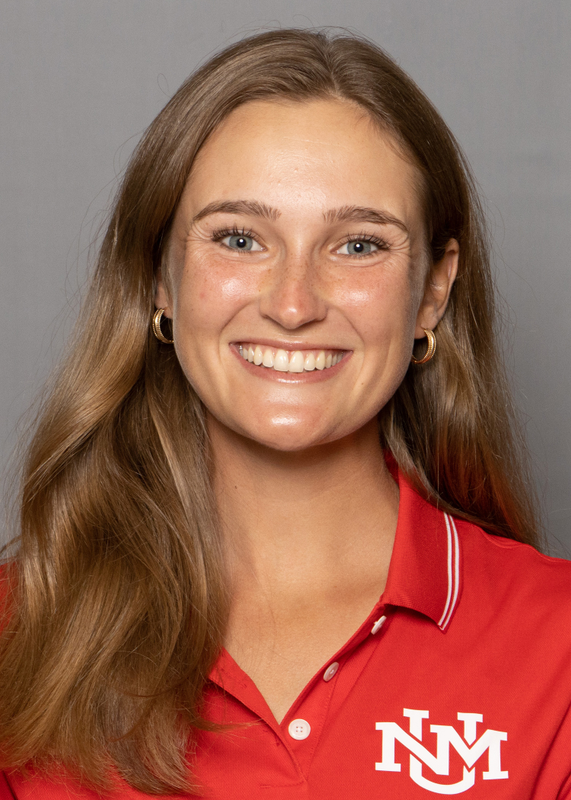 SOPHOMORE (2020-21): Saw action in a pair of tournaments on the season to total six rounds … posted a low round of 73 at the Branch Law Firm/Dick McGuire Invitational … best finish of the season was at the Lobos’ inaugural tournament of the year, the Lamkin Invitational, where she finished tied for 38th … registered a scoring average of 78.00 … named to the 2020-21 Mountain West All-Academic Team … named a 2020-21 Mountain West Scholar Athlete.

FRESHMAN (2019-20): Competed in three tournaments for a total of nine rounds … shot an average of 76.44 strokes over nine rounds… had a season-low score of 73 twice, at the Branch Law Firm/Dick McGuire Invitational and at the Rebel Beach Invitational … named 2020 Mountain West Academic All-Conference … named a 2019-20 Mountain West Scholar-Athlete.

HIGH SCHOOL: Attended Lycée Jeanne d’Albret where she graduated in 2019 … played club golf for the Saint Germain Golf Club … club team appeared at the quarter final at the 2019 French Club Championship where she finished 15th individually … champion of the 2017 French Championship (15-16 age division) … runner up at the 2018 French Championship (17-18 age division) … registered a top-40 finish at the French International Rothschild Trophy … finished in the top-10 at the Saint Germain Grand Prix … best French ranking was 31st in 2017.

PERSONAL: Born on May 11 in Stockholm, Sweden to patents Valérie and Hervé Lauer … has two siblings, Justine and Jules … majoring in anthropology … hobbies include writing poems and reading novels … favorite athlete is Tommy Fleetwood … favorite food is bread, specifically baguettes … favorite movie is “The Matrix” … chose UNM for the connections she made with her teammates and coaching staff, the amazing facilities, the New Mexico weather and the success that UNM has shown with French golfers.