“The meet started off fantastic with Lizzie,” said UNM head coach Joe Franklin. “When you win any event in college, that is tough to do.”

“I knew I had a home advantage, and it is pretty nice that I got to practice here,” said White, who was an All-American in the long jump during her freshman year at Southern Utah 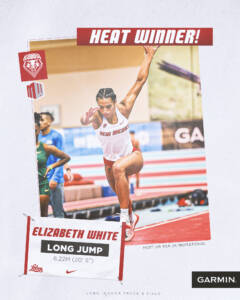 University in 2021-22. “I just trusted the training we have behind us from the fall, and it was nice having some good competition. I knew there were some bigger schools here, so coming into it I knew I had enough people to push me.”

White didn’t waste any time, ripping off her narrow miss of the program record on her first leap of the morning. “Usually my first one is my best one,” said White, whose PR in the long jump is 6.34 meters (20’ 9.75”). “My mindset is to just get a mark (on the first jump), and then see what happens. My last two were really good, I just scratched barely in the red.”

A lineup that featured three newcomers cruised past the school record in the 4×400-meters, which stood at 3:43.45 entering the day. Logan Neely, Tianna Holmes, Annamaria Lesczcynska, and Rebecca Grieve combined for a time of 3:39.77 minutes, which was good enough for a third-place finish among a competitive field of 13 relay squads.

“Topping off the day was our women’s 4×4, and they broke the school record by over four seconds,” Franklin said. “To do that in your first race, with Logan – who had literally been on campus for about 10 days – and Annie, Rebecca, and Tianna, was outstanding. They were two seconds away from UCLA and USC, and that is awesome.” 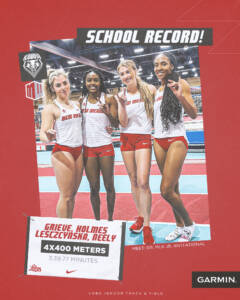 Grieve also topped the school record in the 300-meters, winning a heat of 10 runners with a mark of 38.81 seconds. Factoring in her school record mark of 1:32.86 in the 600-meters at the Air Force meet in December, Grieve has now collected three school records in the first two meets of her collegiate career.

“Jake jumped exceptionally well,” Franklin said. “In the 300s Jevon did great, and it was his first real 300 race. Brodie Young set a Scottish 300 record as well.”

Competing in the 300-meters for the first time, Jevon O’Bryant emerged victorious with a time of 33.39 seconds. Freshman Brodie Young finished in 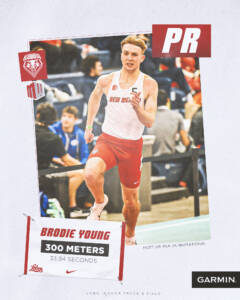 Lauren Bettencourt put together a strong showing in her first meet of the indoor season, posting a personal-best mile time of 5:08.00 minutes.

In her Lobo debut, Aleksandra Wolczak registered a 200-meter time of 25.77 seconds. She was followed by Kora Pettengill at 27.02 seconds, Alexandra Adams at 28.07 seconds, and Victoria Plummer at 28.17 seconds. Pettengill also participated in the long jump, where she notched a leap of 4.49 meters (14’ 8.75”). Wolczak and Plummer also participated in the 60-meter hurdles, notching times of 9.14 seconds and 9.61 seconds, respectively.

NEXT WEEK: The Lobos return to the track Friday to kick off the UNM Team Open at the Convention Center. Live coverage for next week’s two-day meet will be available online here.