ALBUQUERQUE, N.M. — Many people that are into pop culture and sports revere the year of 1984 as one of the greatest years ever.  It’s argued that all four major sports had superstars at their apex. Wayne Gretzky in the NHL, Larry Bird, Magic Johnson and Michael Jordan in the NBA, John Elway, Joe Montana and Dan Marino in the NFL and Tony Gwynn, Wade Boggs and Mike Schmidt in the MLB. Hulk Hogan was the king of the wrestling world.

1984 was the year of the Terminator, Ghostbusters, The Karate Kid, Sixteen Candles and Beverly Hills Cop. Michael Jackson’s Thriller was the top album, and it was released in 1982.  Van Halen’s 1984, Chicago 17 and Billy Joel’s Innocent Man were everywhere.

However, 1984 also was a key moment for The University of New Mexico’s Athletic Department, as Janice Ruggiero (then Janice Branch) was recruited by head women’s basketball coach Doug Hoselton.  That began Janice’s long affiliation with UNM, and while that affiliation will continue, Ruggiero, the longest-tenured member of the UNM Athletics department and the Deputy A.D. for Internal Operations, has announced her retirement from athletics.  She isn’t going far, as she will join the UNM Foundation to serve in a fundraising capacity, working to help programs at the university that she has called her home for nearly 40 years.

“It has been a great honor to represent the University of New Mexico as a student-athlete, women’s basketball coach, and athletic administrator—a journey I began at 18 years of age,” said Ruggiero. “However, the time has come for me to begin the next chapter of my life. It is very difficult to put into a few words an experience of a lifetime, but in my 32 years I was fortunate to be surrounded by amazing student-athletes, coaches, and staff. My greatest pleasure was seeing our student-athletes succeed in the classroom, competition, and beyond.” 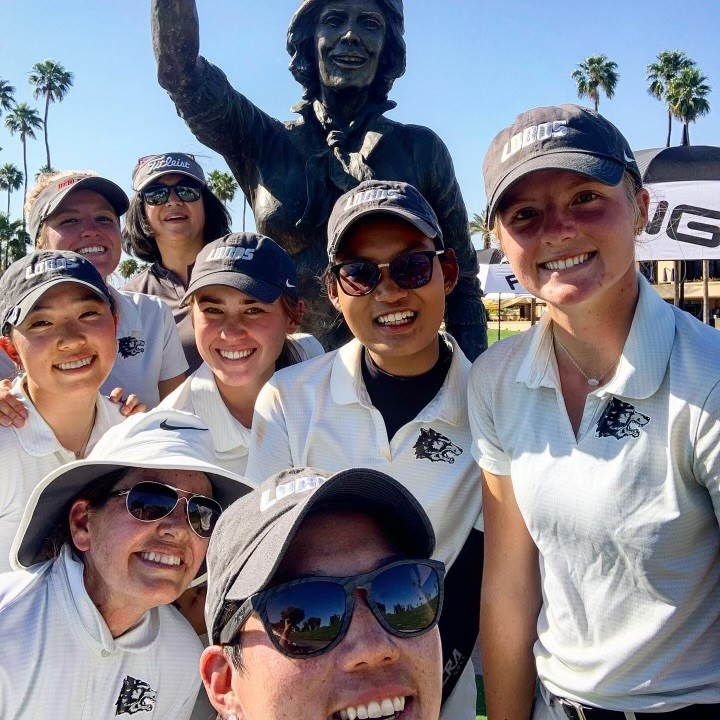 Ruggiero’s impact on UNM athletics is hard to quantify but simple to measure.  Simply follow any former student-athlete when he or she comes back to campus, for one of the first, if not the first question they ask is “Where’s Janice?”

While it’s easy to see marketing folks running around a basketball court running a halftime promotion, or trainers and coaches, Ruggiero was largely behind the scenes as the Deputy A.D for Internal Affairs.  She oversaw athletic performance areas, the training room, academic services and compliance.  She has served as UNM’s Mountain West liaison has had sport oversight over women’s basketball, men’s and women’s cross country, track and field and women’s golf.

She was named Deputy A.D. for Internal Affairs in December of 2015 following 15 years as Associate Athletic Director.  She has also served as UNM’s Senior Woman Administrator since 2000 as well, taking over that role from her mentor, the retiring Linda Estes.

In 2017, after the retirement of Paul Krebs, Ruggiero stepped in and served as interim A.D. until the hiring of Eddie Nuñez, who has worked along side her since his hiring in September of 2017. 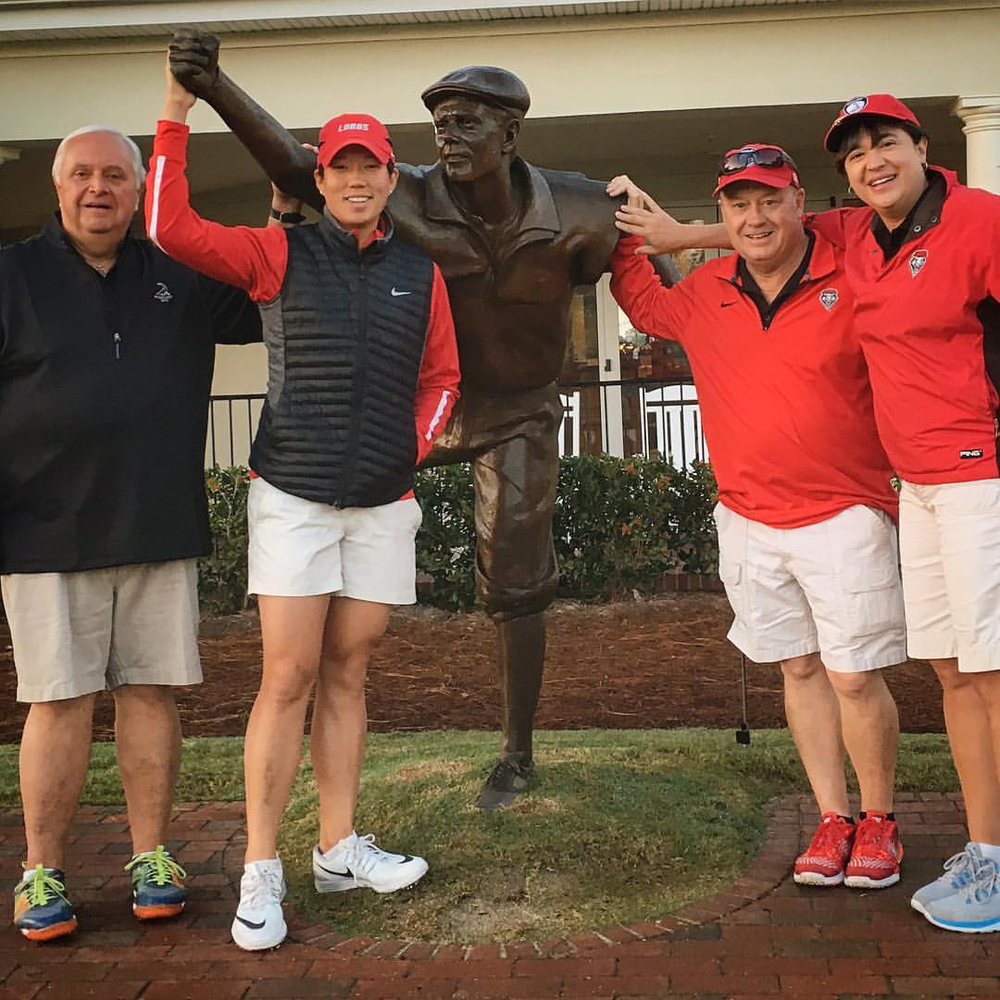 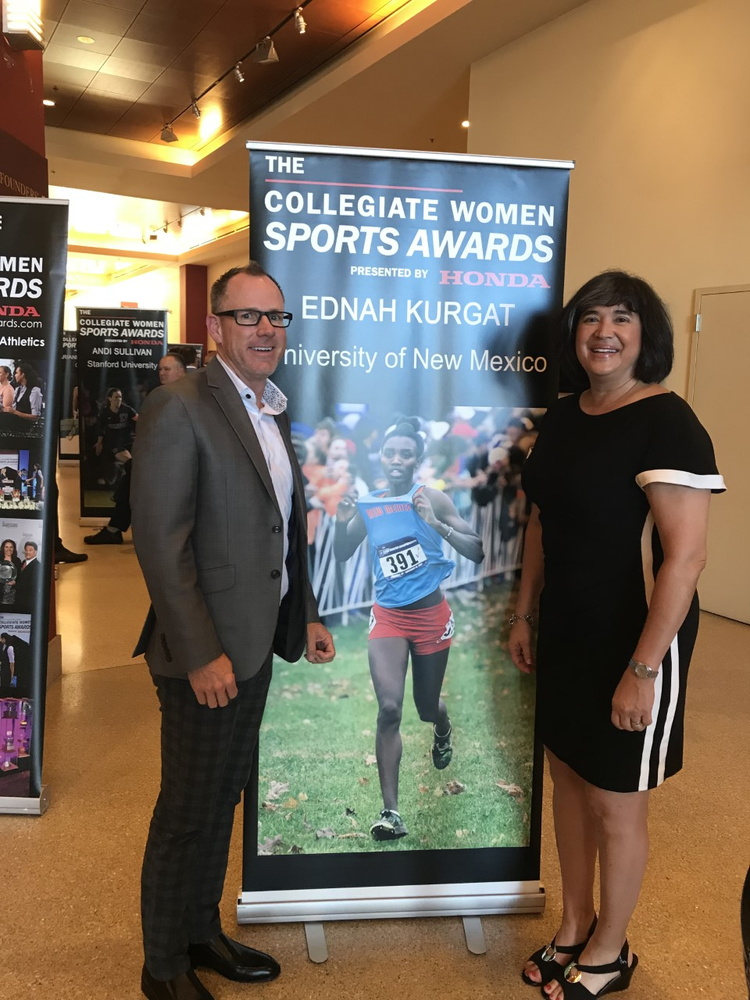 “A stalwart and a leader at UNM,” said Nuñez.  “From her time as a student-athlete to her time in administration, Janice’s love for her home has always shown in her passion towards everything she has done. In her 30-plus years at UNM Athletics one thing that has remained as her guiding light, and it’s her dedication is her true commitment to the student-athletes.”
Nuñez added, “I cannot ever thank Janice enough for everything she did for me as a new AD. Through it all her friendship, her patience, and her loyalty towards UNM has been unwavering. It didn’t matter who, what, when or how, if you asked Janice to help with something, she was going to do everything possible to make it happen.”

All of that national work never impacted her role at UNM, nor the relationships that she fostered with her co-workers and more importantly, the student-athletes.  It’s an accomplishment of which she is rightly happy about.

“I am proud to have been a part of what we have accomplished at UNM Athletics for our student-athletes and the community. Representing the university in the city in which I was raised has been a dream come true.”

Ruggiero added, “This University is dear to my heart, and although my time with the Athletic Department is coming to a close, I have decided to stay here at my alma mater and begin my next chapter working for the UNM Foundation as a Director of Development for the Anderson School of Management. As an alumni of Anderson, I look forward to continuing to help students succeed in their educational endeavors. My entire career has been dedicated to supporting Lobos, and I look forward to continuing that work by supporting the students pursuing business degrees.” 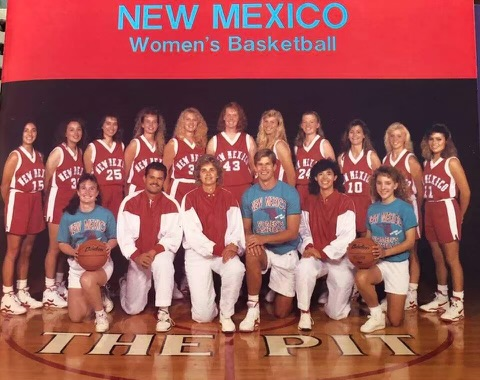 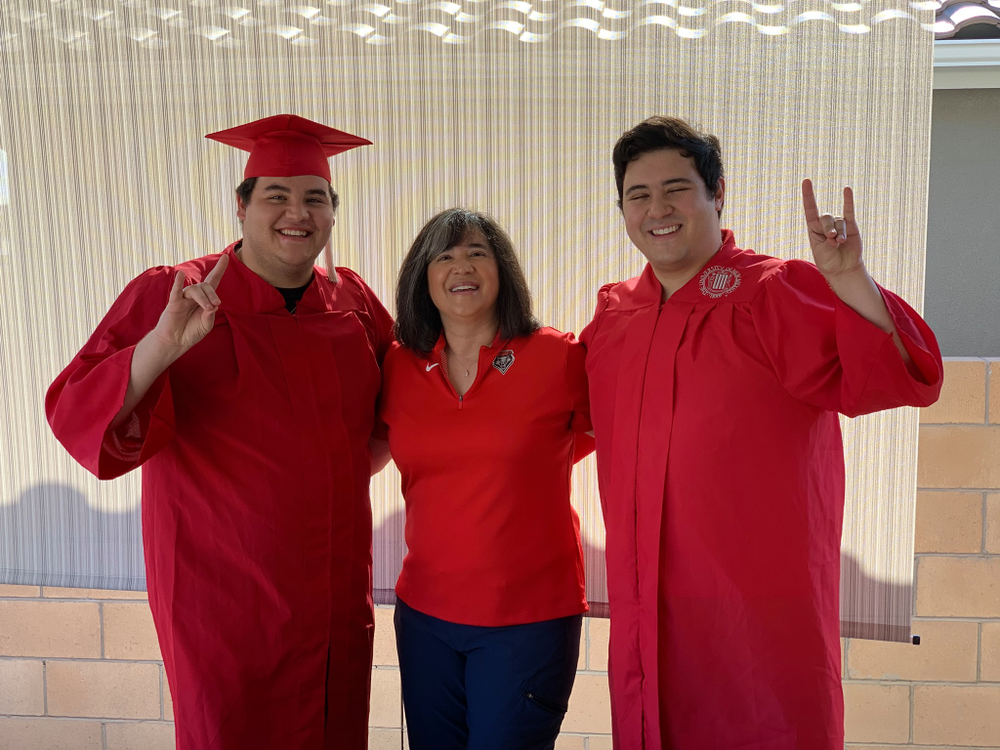 Ruggiero played basketball at UNM for three seasons, from 1984-87, and she certainly would be a 1,000-point scorer at UNM had the program not been disbanded right before her senior season. She played her prep ball locally at Eldorado for Don Flanagan.  She transferred to Hawai’i for her final year, but came back to earn the first of her two UNM degrees, earning a bachelor’s in marketing and general management, in 1989.  In 1991, the Lobo women’s basketball program was brought back, and Ruggiero started her career as an assistant coach for the first two seasons the program was back, from 1991-93. After that, she moved into administration (after a brief sojourn working for a medical supply company), starting in athletic business office and eventually working her way up to Deputy A.D.  In 1997, she earned a second degree, this a master’s in sports administration.

She has two sons, LJ and Alex, both of whom, like their mom, are UNM graduates.

For Ruggiero, her story is one that any single UNM student-athlete can look at and admire, going from student-athlete to a successful administrative career, utilizing the skills learned on the court and in the classroom to make a difference for others, and to have a career filled with amazing memories and moments.

“UNM has provided me an education, a career, and a lifetime of memories. I love this University and my home state of New Mexico, and I am forever grateful for the people I’ve met along the way. I am proud to be a Lobo for Life. GO LOBOS!”