ALBUQUERQUE, N.M. — The University of New Mexico women’s track and field team has added some dynamic student-athletes to its 2021-22 roster. 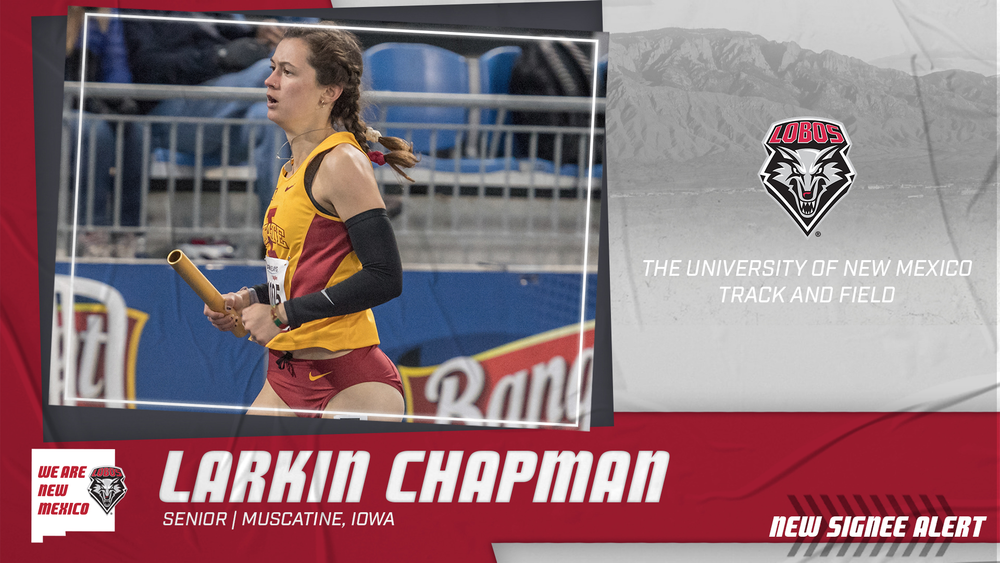 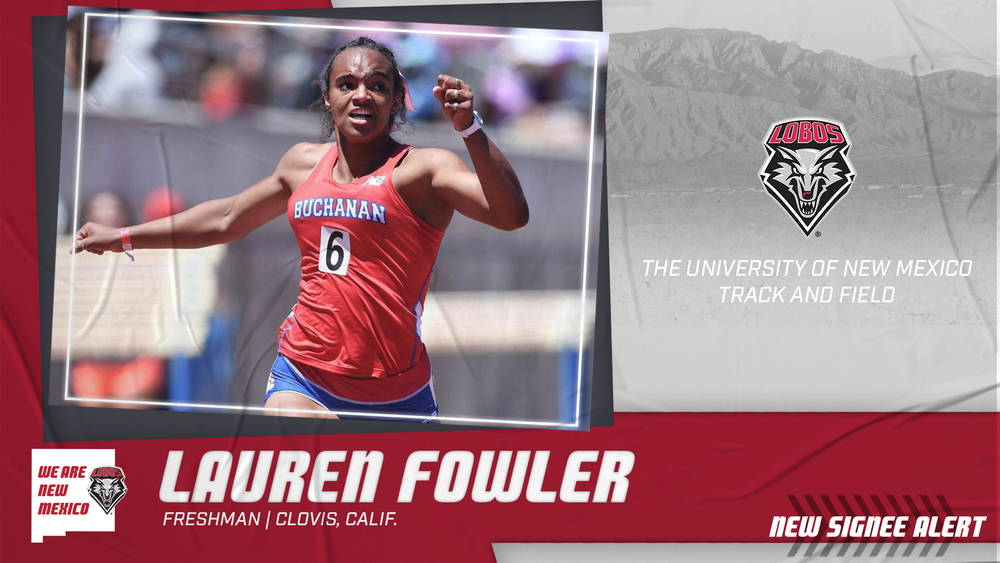 Lauren Fowler will start her collegiate career at The University of New Mexico after graduating from Buchanan High School in Clovis, Calif. Fowler currently holds the Central Selection top 100-meter time of 11.63 seconds and broke the Buchanan school record in the long jump with a mark of 19’4″. Her personal best in the 200m is 24.02 seconds. Most recently she was named a three-time Valley Champion, and sits No. 2 in the state of California in the 100m. 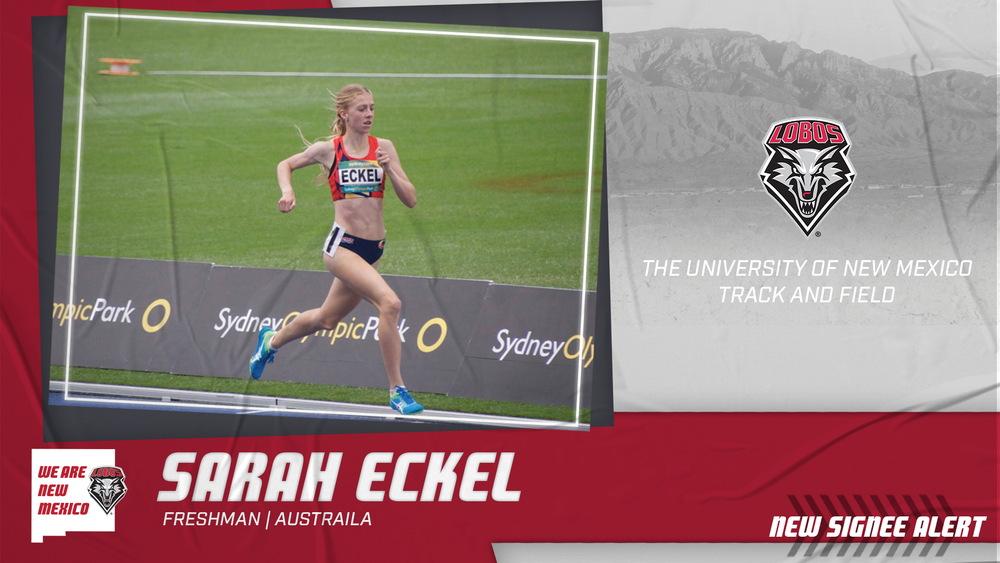 Sarah Eckel will join the UNM squad as a freshman as a middle-distance runner. In 2018, Eckel represented Australia at the World U20 Championships in the 1500m. She began training at the age of 13 with Team Tempo under coach Adam Didyk and started competing in her first proper track races for Hills Districts Athletics Club. 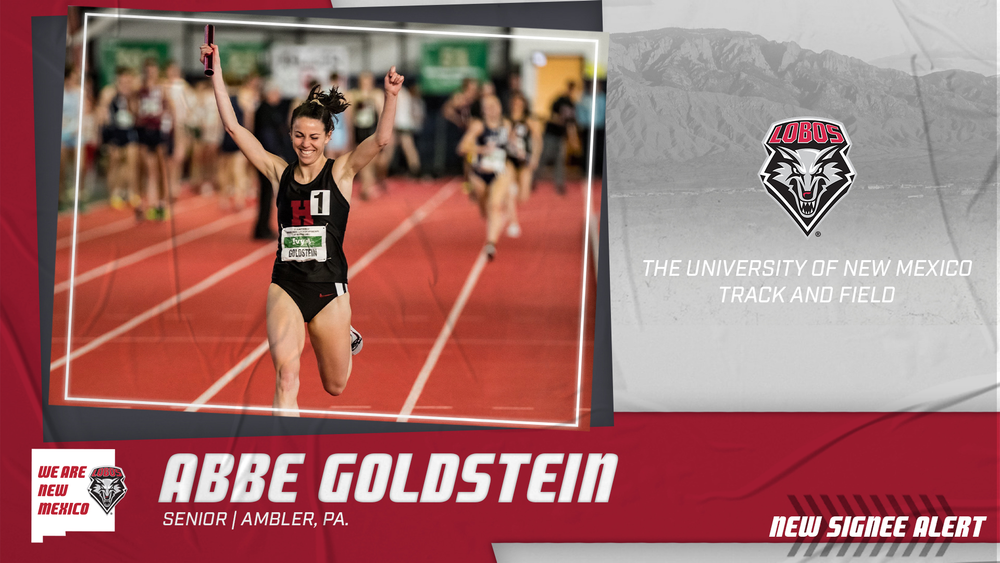 Abbe Goldstein has had an impressive collegiate career thus far and will be transferring to UNM from Harvard. In 2020, Goldstein qualified for the NCAA Championships in the mile, but the event was canceled due to the COVID-19 pandemic. She also participated in the NCAA East Preliminary Round in 2018, where she ran a then-career-best 4:22.78 in the 1500m. That same season, Goldstein was named Second Team All-Ivy after posting a time of 11:33.95 DMR. Goldstein now holds a personal-best time of 4:10.94 in the 1500m and 4:35.70 in the mile.

This past season, Goldstein’s mile time placed her within the top 16 in the country, earning her a spot at the NCAA Indoor Track and Field Championships. 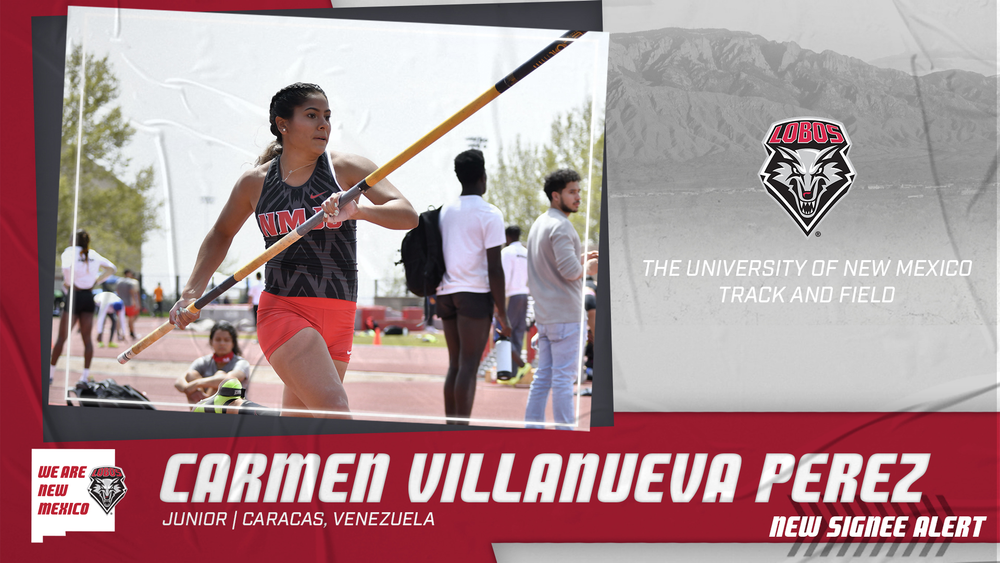 Another signee from New Mexico Junior College is Carmen Villanueva Perez. Villanueva Perez is a four-time NJCAA NCAA National Champion in the pole vault and currently holds a personal-best mark of 4.00m (13’1.5″), which also serves as the NMJC school record.

Villanueva Perez is a tremendous addition to the Lobo pole vault crew. 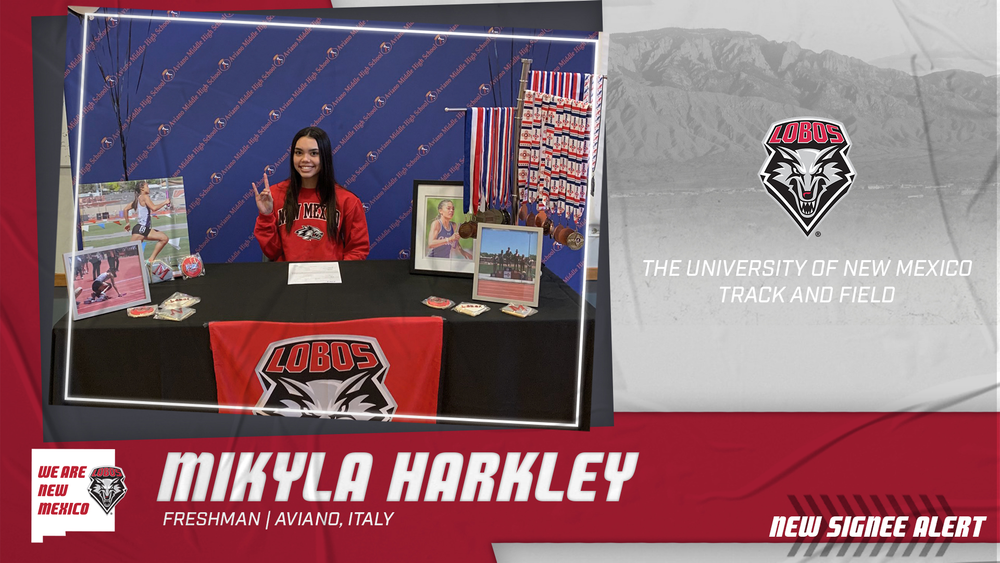 Mikyla Harkley will start her collegiate career with the Lobos after completing a successful high school career. Harkley is a graduate of Aviano High School but spent time in New Mexico at Clovis High School. She has competed on varsity track and field teams and has qualified for State Championships since the seventh grade. In 2019, Harkley won the 5A New Mexico triple jump state title with a jump of 38’2″. Most recently, she was a member of the Italian Atletica Brugnera Pordenone Friul Intagali track and field team.

Harkley will be a versatile addition to the Lobo squad this coming season. 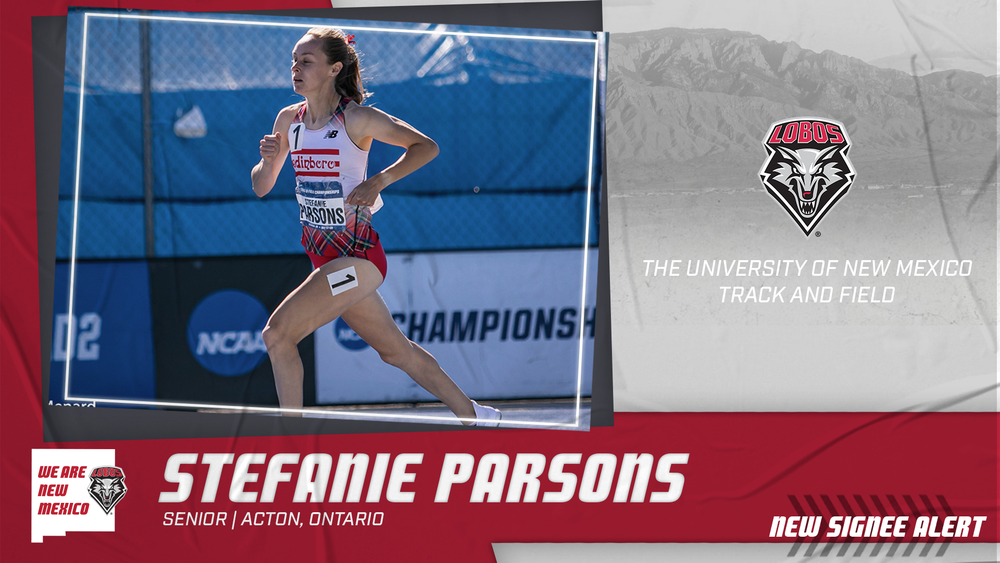 Parsons is a five-time All-American with the Edinboro Fighting Scots. 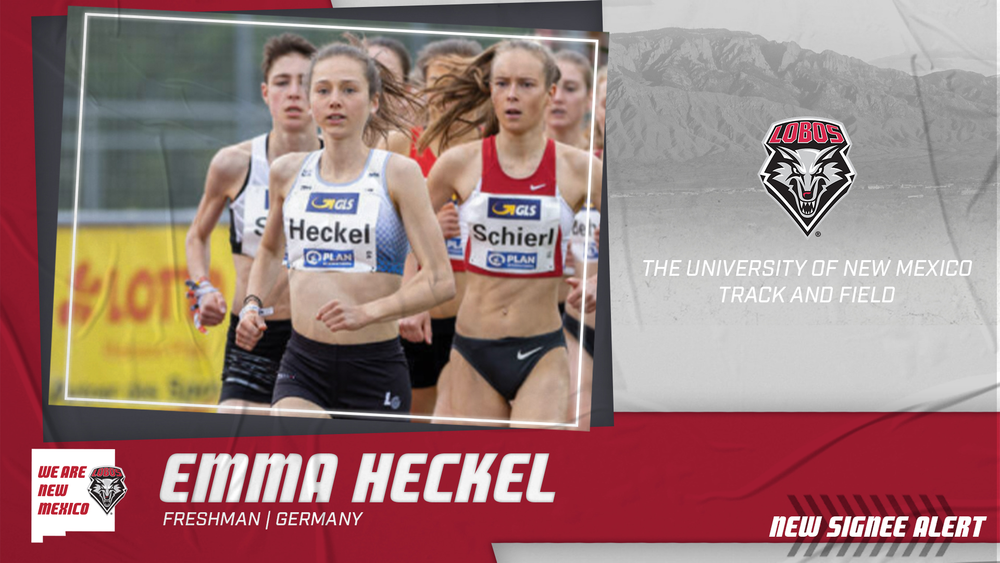 Heckel will join UNM as a freshman, marking her collegiate start with the Lobos. 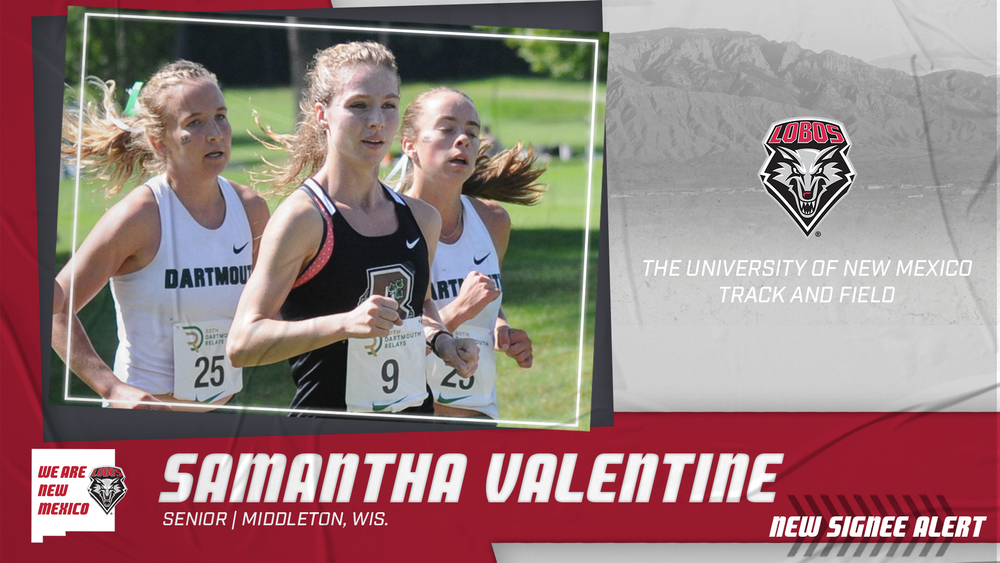 Samantha Valentine is a transfer from Brown University and will be a great addition to the Lobo distance squad. In 2019, Valentine was an NCAA qualifier in the 3,000-meter steeplechase, took third overall in the 3000m at the Ocean State Invitational. She also set a personal-record 1500m (4:30.82) with a 13th-place finish at the Sam Howell Invitational and a personal-record 3000m run (10:22.87) for a fourth-place finish and a fifth-place finish in the 4×800 at the Ivy League Outdoor Track & Field Championships. 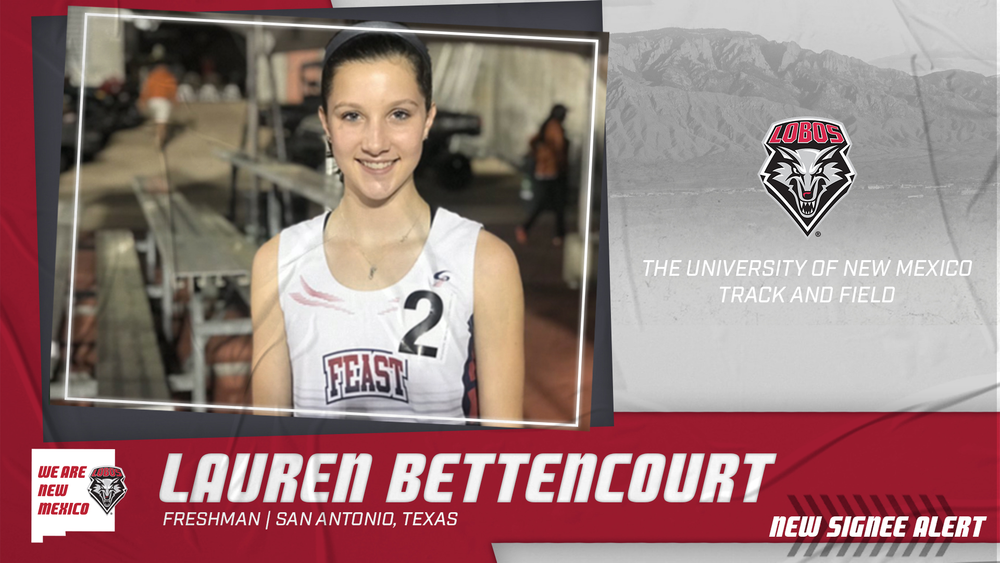 Lauren Bettencourt is a dynamic distance runner who will join the Lobo squad this upcoming season. Bettencourt most recently won the Texas state title in the 800m for the Family Educators Alliance of South Texas in the Homeschool State Track Meet and also aided her team in winning the state team title. Bettencourt holds her school title in the girl’s 400m with a time of 54.00. She will start her collegiate career this upcoming track season. 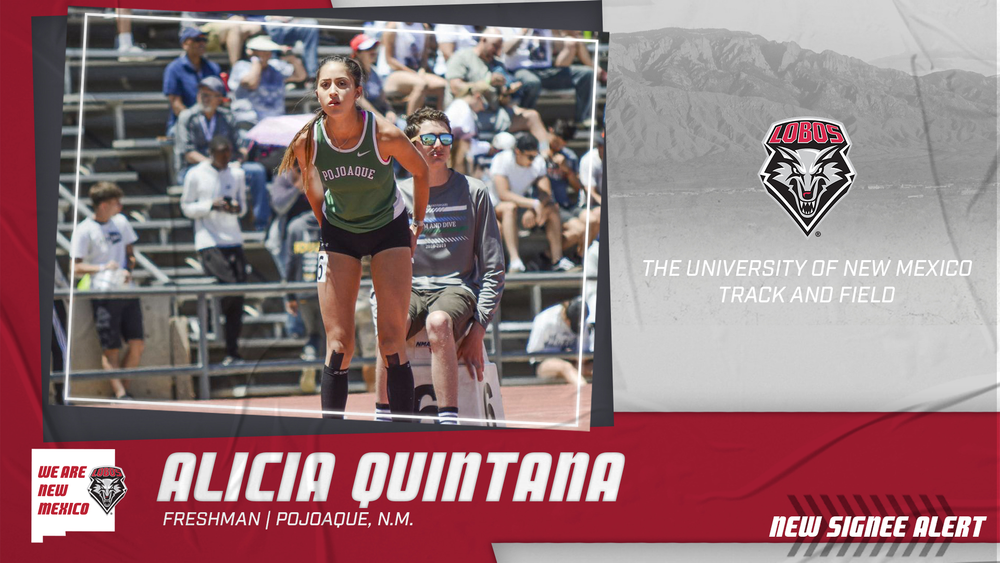 Alicia Quintana will start her collegiate career as a Lobo after graduating from Pojoaque Valley High School. The incoming freshman claimed three medals at the 2019 Class 4A-5A state track and field meet at the Great Friends of UNM track and field facilities in Albuquerque after a reclassification of Pojoaque into the 5A bracket. In her first race, she flashed to fourth place with an outstanding time of 12.59 seconds. In her next race, she ran a personal record of 58. 5 seconds in the 400-meter dash, taking third place. In her final race, she took fourth place in the 200-meter dash with another great time of 26.47 seconds. Quintana will have a strong career with the Lobos.