ANCHORAGE, Ak. — In a race that took 52 minutes and 44 seconds and covered 20 kilometers, which is the equivalent of 12.43 miles, seventh-tenths of a second are all that separated the top three finishers.  And has been the case most of the season, it was The University of New Mexico that came out on top.

Kornelius Grøv tied a Lobo record with his fifth Nordic win of the season, and Ricardo-Izquierdo-Bernier picked up his fourth second-place finish of the season as the Lobo men’s Nordic squad won the RMISA title in the Nordic 20K Classical with 87 points.

Overall, the Lobos are sitting in fourth place overall at the RMISA Championships with just two events left, the alpine slalom events for the men’s and women’s teams.  UNM trails host Alaska Anchorage for third place by just 10.5 points.

Grøv, who won all four regular season freestyle events and had a second-place finish at the Montana State Invitational classical race, picked up his first classical win, by the slimmest of margins.  In what amounted to a sprint to the finish, Grøv crossed the line at 52:44.0 for his fifth win of the season.  The drama lay behind him, with Ricardo Izquierdo-Bernier and Colorado’s Erik Dengerud breathing down his neck.  Coming up to the line, Izquierdo-Bernier stretched out his left ski, his boot crossing the line about two inches ahead of Dengerud’s left boot, putting him second. 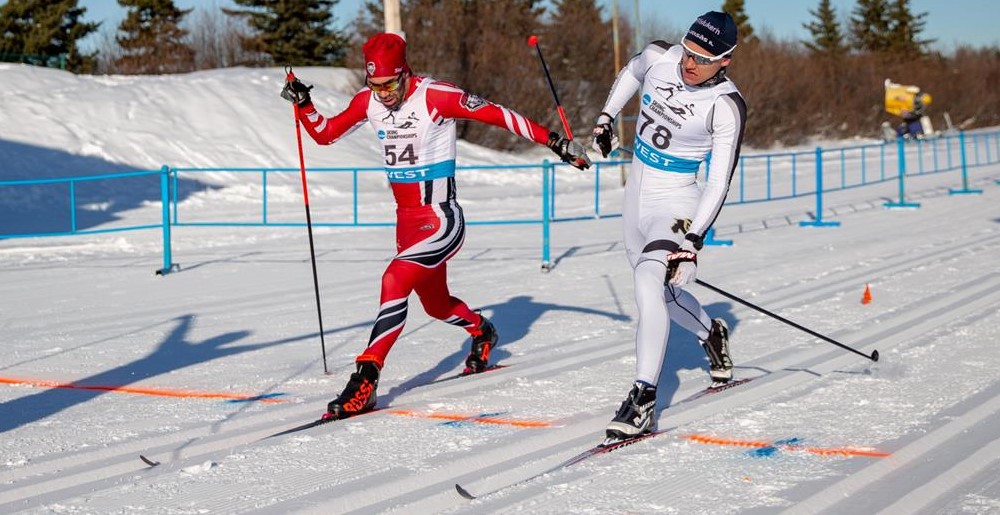 That stretch turned into a six-point swing, and it’s what gave UNM the men’s classical title, 87-84 over Colorado.  UNM’s other 10 points came from Johan Eirik Meland, who was 26th overall.  Ben Berend finished 30th for UNM.

For Grøv, his fifth win tied Jimmy Vika (2003) and Martin Kaas (2010) for the most in a single season in UNM history.  Although just a freshmen, Grøv is now just one win away from tying the career record for Nordic wins, which is six by Martin Kaas from 2008-11. Grøv is now the team leader in points scored with 353 for the season.

Not to be outdone, the podium finish for Izquierdo-Bernier was his sixth of the season, with one win, four seconds and a third-place finish.

On the women’s side, Julie Spets turned in a career-best finish, tying for 11th place, picking up 20.5 points for the Lobos.  Dariya Kuznetsova and Savanna Fassio finished 19th and 20th overall, picking up 15 and 14 points, to give UNM 50.5 as the Lobos finished fifth in the race.  Brenna Egan was UNM’s other finisher, coming in 24th.

At Alyeska Resort, the giant slalom was a harrowing adventure.  Despite having raced on the general course the day before, the bitter cold and conditions proved tremendously difficult.  In the women’s race, more than half the field didn’t finish.

Soňa Moravčíková was UNM’s top finisher, coming in fourth place.  She sat in fifth after the first run, and was just one of three Lobos to finish the opening run out of six.  Moravčíková scored 31 points for UNM after failing to finish yesterday in the GS.  Katharine Irwin was UNM’s second finisher, coming in 13th place, scoring 18 points and Chloe Margue scored 15 points with a 17th place finish.

Rebecca Fiegl, Hailey Cutler and Antonia Wearmouth, who finished sixth, 10th and 11th respectively yesterday in the giant slalom for the UAA Invitational, all didn’t complete the opening run.  Overall the Lobos were fourth in the race.

On the men’s side, it was Vegard Busengdal once again leading the way with a ninth-place finish, good for 22 points. Tyler Theis was UNM’s No. 2 scorer, picking up 18 points with a 13th place finish, and Olav Sanderberg scored 13 points as he came in 19th.