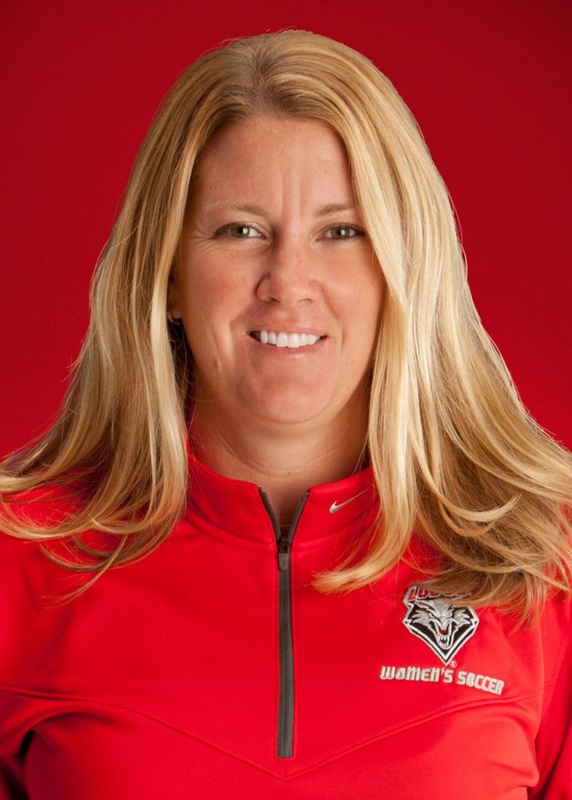 Heather Dyche joined the Lobo family in 2015 as the fourth head women’s soccer coach at The University of New Mexico. The 2022-23 academic year marks her eighth season in charger of the Lobos.

Dyche guided the Lobos to a share of their third-consecutive Mountain West regular-season title in 2022, with the team going 7-3-9 overall and 5-1-5 in conference play. The Lobos hosted the Mountain West Championships, falling to San Jose State in penalty kicks in the semifinals of the tournament. UNM broke the program record for consecutive shutout minutes with 602:51, ending the season with the streak intact. UNM’s team goals-against average of .082 was the lowest the program had seen since a mark of .068 during the 2011 season.

The 2021 season followed in the 2020 season’s success. The Lobos won their first Mountain West Tournament championship since 2011. Dyche led the Lobos to many records, including a program-high eight-game winning streak and nine-game conference winning streak (dating back to the 2020 season). She guided the team to the second-most single-season wins as they finished the season with 14 wins, also going undefeated in conference play at home. In typical MW Coach of the Year fashion, she coached the Newcomer of the Year and Offensive Player of the Year.

The 2020 season saw records fall as UNM advanced to the second round of the NCAA College Cup and winning its first outright Mountain West title since 2011.  The program went 10-2-1 under Dyche as she was named the Mountain West’s Coach of the Year.  The Lobos blasted their way into the record books by averaging 2.38 goals per game (scoring 31 in just 13 games).  The team turned in a 0.90 goals against average, the lowest in seven years, and UNM was nearly unstoppable in the regular season, allowing just three goals in 10 games leading up to the title game.  The Lobos of 2020 advanced to the NCAA Tournament after a thrilling 3-2 overtime win over San Diego State in front of a capacity crowd in Albuquerque.  UNM then got past Navy in the opening round, winning 4-2 in penalties after tying 1-1 in regulation.

Gwen Maly was one of five players to earn First Team All-Mountain West honors, and she became the first women’s soccer player in the history of the Mountain West to be named Mountain West Female Scholar-Athlete of the Year, the highest individual honor bestowed to a student-athlete in the league.

The 2019 season saw the Lobos go 11-8-1 overall and finish 6-4-1 in the Mountain West, good for fourth place. The Lobos for the second straight season placed five players on the All-Mountain West squad and it gave UNM 36 wins over the previous three seasons, the second-best three-year win total in school history. One of those wins was a 1-0 season opening win over No. 22 Texas Tech at the UNM Soccer Complex, UNM’s first win over a ranked opponent since 2010.

Dyche’s 2018 Lobo team set a program record for goals scored with 45 and posted second-best program marks in assists (33) and points (123). In terms of individual player accolades, three standouts received All-Pacific Region honors from the United Soccer Coaches, which was a program record. From the Mountain West, the 2018 team had five honorees, three of which were first team selections. The Lobos won the Mountain West regular season title this season. 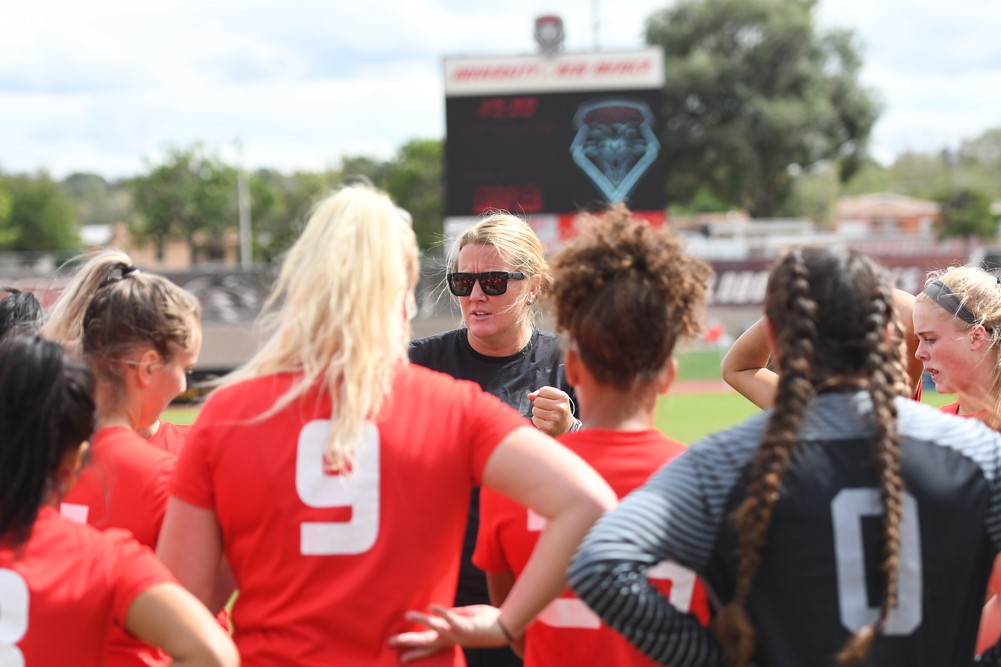 The Lobos posted double-digit wins in 2017, going 12-8-2 overall and placing fourth in the Mountain West standings with a league record of 7-2-2. The Lobos advanced their way to the Mountain West Championships title game by virtue of two successful penalty kick shootouts, before falling to San Diego State in the title match.

Dyche led UNM to another winning season in 2016, as the Lobos went 9-7-3 overall and finished 5-5-1 in league play to tie for seventh place.

In her first season, Dyche became the third coach in Lobo women’s soccer history to begin her career with double-digit victories by going 10-8-2 in 2015. That record included a 7-3-1 record in Mountain West play and a run to MW Tournament semifinals.

Along with leading the Lobos, Dyche is also a technical advisor for USL team New Mexico United. She is one of only two women in the country involved with men’s professional team staffing. She is also the vice president of United Soccer Coaches and set to be named the president of the organization in 2026.

She is on the US Soccer Senior Instructional Staff as one of two women teaching the National A and B license, awarding licenses to candidates. Dyche is currently the only American woman on the FIFA Women’s Development Team as a Technical Expert.

Dyche is also a coach, instructor, and scout with the United States Soccer Federation (USSF). Dyche is an assistant coach for the U14, U15, U16, U17, U18, U19 and U20 US Youth National Teams. She helped lead the U20 team to a victory in the CONCACAF World Cup qualifier in the Dominican Republic. She also serves on the USSF instructional staff, instructing USSF B- and USSF C-licensed national coaching schools across the country.

Dyche’s footprint at the elite level spans past the national stage, as she has also assisted for national teams from Antigua, St. Kitts and Nevis and Grenada. 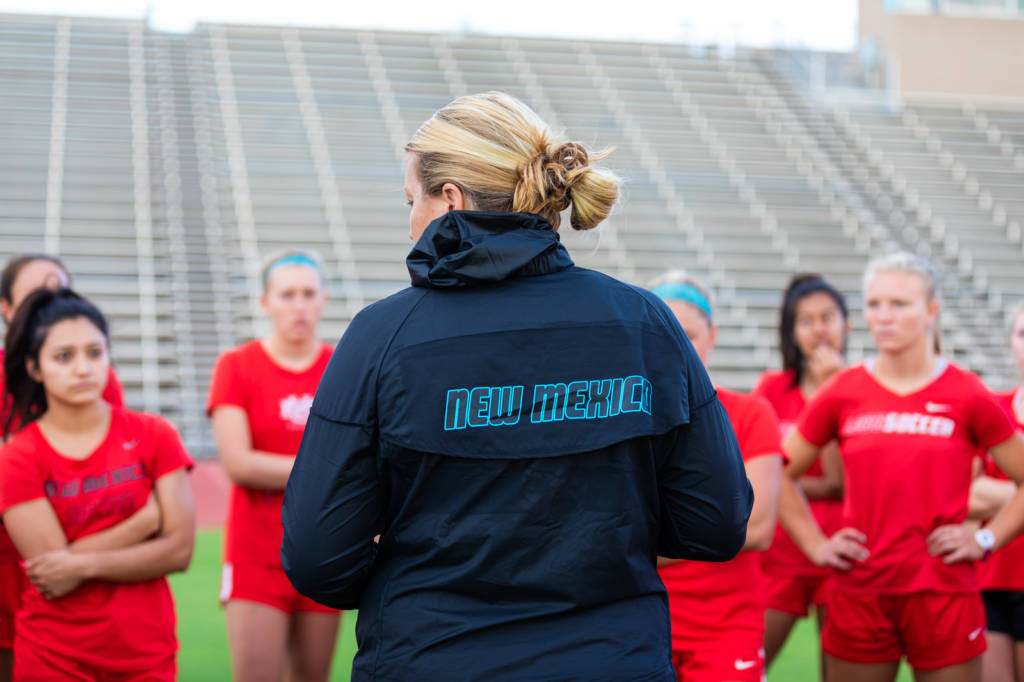 Dyche serves on the instructional staff for The Confederation of North, Central American and Caribbean Association Football (CONCACAF), teaching CONCACAF courses and licensing coaches throughout our confederation.

She is also the co-founder and head coach of LEAD Academy (Leadership and Empowerment through Athletic Development Soccer) – an all-girls soccer leadership training school located here in Albuquerque.

Prior to joining the University of New Mexico, Dyche was a presenter at the National Soccer Coaches Association of America/U.S. Youth National Conference in 2013 and at the U.S. Soccer National Symposium in 2011. 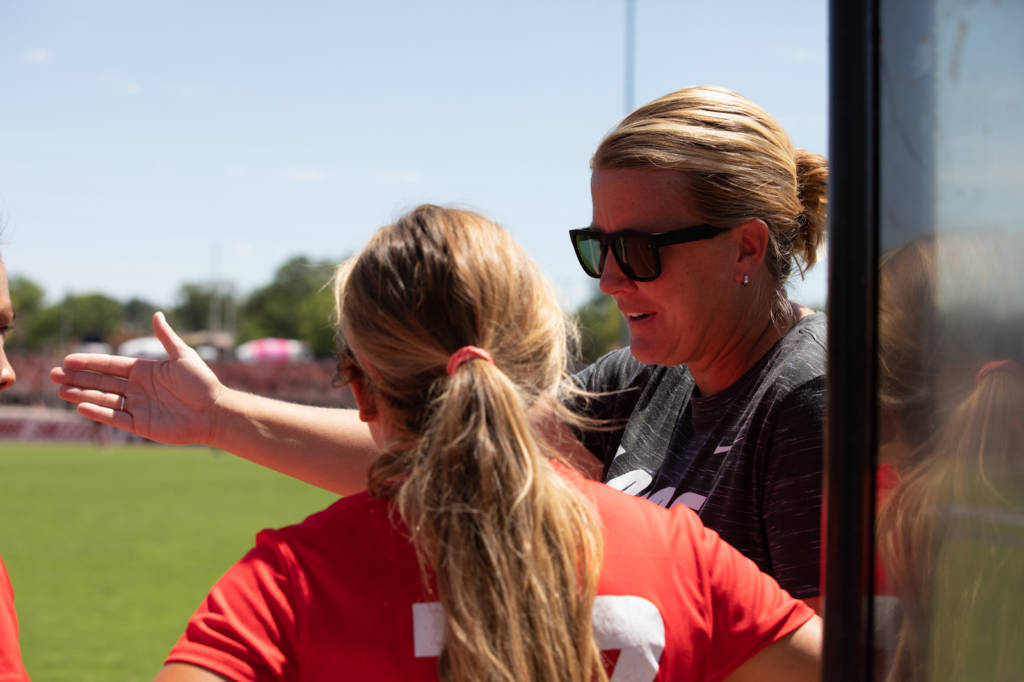 Dyche’s New Mexico soccer roots are as extensive as her résumé is. She has coached more than 60 players who have gone on to collegiate soccer programs. She has coached multiple state and regional champion club teams in New Mexico. Dyche was also the NMYSA Coach of the Year in 2008 with the Rio 95G Magic. Additionally, she served as the associate head coach and team captain of the now-defunct Albuquerque Asylum of the Women’s Premier Soccer League from 2006-07.

Dyche accepted a soccer scholarship to the University of Nebraska out of high school and was a participant on the No. 4-ranked women’s soccer program in the nation.

Dyche then transferred to Florida State and played there from 1998-2001, serving as the team captain her senior year. The Seminoles participated in the NCAA Tournament in 2000 and 2001 and were ranked as high as No. 9 in the country during her time there. She was on the Atlantic Coast Conference (ACC) All-Tournament Team in 2001 and was an on the ACC Academic Honor Roll all four of her years there.

She went on to play with ROA Norway – a semi-professional soccer team in 2004-05 – helping the squad win the Norwegian League Championship in ’04.