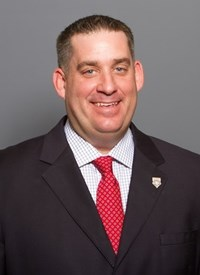 Hutchins led the efforts to develop alcohol sales and policies in athletic venues, generating new revenues for the department. Hutchins also led efforts to create the El Lobo Rojo beer with Rio Bravo Brewing Company. El Lobo Rojo is an officially licensed product that will be in distribution all over New Mexico.

Hutchins is active in the community as he serves on the Board of Directors for Special Olympics New Mexico.  He has also assisted with Boys and Girls Clubs, Big Brothers Big Sisters in the past and is very active on campus with University initiatives.

Hutchins graduated from Missouri State University with a bachelor’s degree in Private Commercial Recreation. He received his master’s degree in Sport Administration from Canisius College. Hutchins, 41, is married to Michelle Nowfel and together they have a daughter, Amira, a son, Connor.